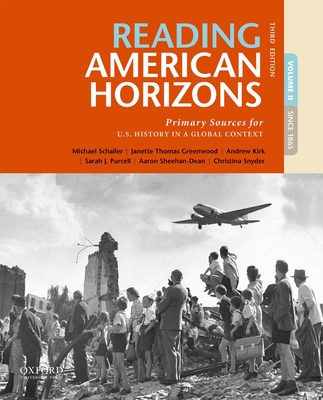 By  Michael Schaller , Janette Thomas Greenwood , Andrew Kirk
Paperback
$ 21.95
Unavailable
This item may not be available to order. Please call 617-566-6660 for more information.

A two-volume primary source collection, expertly edited by the authors of American Horizons, provides a diverse set of documents that situate U.S. History within a global context. Covering political, social, and cultural history, the nearly 200 selections--including many visual documents--will spark discussion in the classroom and give students a deeper understanding of America's history. Reading American Horizons includes solid pedagogy to make the documents more accessible to students.

Michael Schaller (Ph.D., University of Michigan, 1974) is Regents Professor of History at the University of Arizona where he has taught since 1974. His areas of specialization include U.S. international and East Asian relations and the resurgence of conservatism in late-20th century America. Among his publications are: Altered States: The United States and Japan Since the Occupation (OUP, 1997), The U.S. and China into the 21st Century (OUP, 2002), Right Turn: American Life in the Reagan-Bush Era (OUP, 2007), and Ronald Reagan (OUP, 2011). Janette Thomas Greenwood is Professor of History at Clark University (Ph. D. at the University of Virginia); specializes in African-American history and history of the U.S. South. Books include: The Gilded Age: A History in Documents (Oxford University Press, 2000); Bittersweet Legacy: The Black and White 'Better Classes in Charlotte, 1850-1910 (University of North Carolina Press, 1994); First Fruits of Freedom: The Migration of Former Slaves and Their Search For Equality in Worcester, Massachusetts, 1862-1900 (University of North Carolina, 2010). Andrew Kirk is Professor of History at University of Nevada, Las Vegas (Ph.D. at the University of New Mexico), and specializes in the history of the U.S. West and environmental history. Books include Collecting Nature: The American Environmental Movement and the Conservation Library (University of Kansas Press, 2001), and Counterculture Green: The Whole Earth Catalog and American Environmentalism (Lawrence: University Press of Kansas, 2007). Sarah J. Purcell is an Associate Professor of History at Grinnell College (Ph. D. at Brown University); specializes in the Early National period, Antebellum U.S., popular culture, politics, gender, and military history. She also directs the Rosenfield Program in Public Affairs, International Relations, and Human Rights. Books include: Sealed with Blood: War, Sacrifice, and Memory in Revolutionary America (University of Pennsylvania Press, 2002), The Early National Period (Facts on File, 2004), and The Encyclopedia of Battles in North America, 1517-1916 (Facts on File, 2000). Aaron Sheehan-Dean is the Fred C. Frey Professor at Louisiana State University (Ph. D. at the University of Virginia); specializes in Antebellum U.S. and the U.S. Civil War. Books include Why Confederates Fought: Family and Nation in Civil War Virginia (The University of North Carolina Press, 2007), The View from the Ground: Experiences of Civil War Soldiers (The University Press of Kentucky, 2006), and Concise Historical Atlas of the U.S. Civil War (Oxford University Press, 2008). Christina Snyder is a historian of colonialism, race, and slavery, with a focus on North America from the pre-contact era through the nineteenth century. Snyder's first book, Slavery in Indian Country: The Changing Face of Captivity in Early America, was published by Harvard University Press in 2010 and earned a wide range of accolades, including the Berkshire Conference of Women Historians Book Prize, the James H. Broussard Prize from the Society for Historians of the Early American Republic, and the John C. Ewers Prize from the Western History Association. Snyder's latest book, Great Crossings: Indians, Settlers, and Slaves in the Age of Jackson will be released by Oxford University Press in early 2017. She is also the author of more than twenty-five articles and review essays, and her research has been supported by the American Council of Learned Societies, the American Antiquarian Society, the American Philosophical Society, and the Andrew W. Mellon Foundation. Snyder's work has been featured on PBS, NPR and Slate.