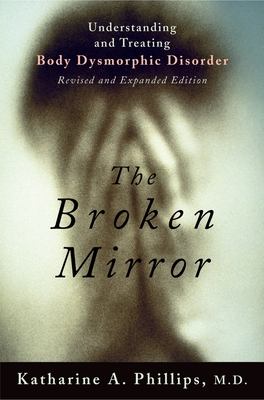 By  Katharine A. Phillips
Paperback
$ 35.95
Out of Stock In Store (Available to Order)

In a world obsessed with appearances, it is not surprising that body dysmorphic disorder, or BDD, has manifested itself as a troubling and relatively common problem for many individuals. In The Broken Mirror, the first and most definitive book on BDD, Dr. Katharine Phillips draws on years of
clinical practice, scientific research, and professional evaluations of over 700 patients to bring readers her expertise and experience with this often debilitating illness.
BDD causes sufferers to be obsessed by perceived flaws in their appearance and may afflict as much as two percent of the population, or nearly five million people. Many sufferers are able to function well in society, but remain secretly obsessed by their hideous acne or horrible nose, sneaking
constant peeks at a pocket mirror, or spending hours at a time redoing makeup. Others find their lives disintegrate because of their appearance obsessions. It is not an uncommon disorder, simply a hidden one, since sufferers are often embarrassed to tell even their closest friends about their
concerns. The author presents the stories and interviews of over 200 individuals to show the many different behaviors and symptoms of BDD, and includes a quick self-assessment questionnaire. Four new chapters provide updated information on treatment of BDD, frequently obtained treatments to be
avoided, and more detailed advice for family members and friends on how to cope with the disorder.
Left untreated, the torment of BDD can lead to psychiatric hospitalization and sometimes suicide. With treatment, many sufferers are able to lead normal lives. The Broken Mirror is literally a lifesaving handbook for sufferers, their families, and their doctors.

Katharine A. Phillips is RI Director of the Body Dysmorphic Disorder and Body Image Program at Butler Hospital in Providence, Rhode Island, and Professor of Psychiatry and Human Behavior at Brown University School of Medicine.