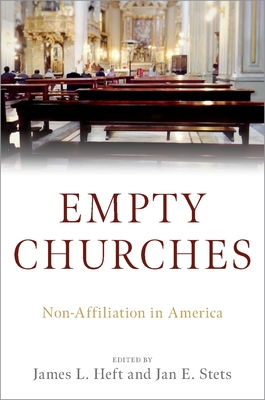 Based in the idea that social phenomena are best studied through the lens of different disciplinary perspectives, Empty Churches studies the growing number of individuals who no longer affiliate with a religious tradition. Co-editors Jan Stets, a social psychologist, and James Heft, a historian of theology, bring together leading scholars in the fields of sociology, developmental psychology, gerontology, political science, history, philosophy, and pastoral theology.

The scholars in this volume explore the phenomenon by drawing from each other's work to understand better the multi-faceted nature of non-affiliation today. They explore the complex impact that non-affiliation has on individuals and the wider society, and what the future looks like for religion in America. The book also features insightful perspectives from parents of young adults and interviews with pastors struggling with this issue who address how we might address this trend. Empty Churches provides a rich and thoughtful analysis on non- affiliation in American society from multiple scholarly perspectives. The increasing growth of non-affiliation threatens the vitality and long-term stability of religious institutions, and this book offers guidance on maintaining the commitment and community at the heart of these institutions.

James L. Heft, S. M., served as professor and chair of the Theology Department at the University of Daytonfor six years, Provost for eight years, and Chancellor and Professor of Faith and Culture for 10 years, before moving to the University of Southern California in 2006 as the Alton Brooks Professor of Religion and President of the Institute for Advanced Catholic Studies. He is the author, editor and co-editor of fourteen books, including Catholicism and Interreligious Dialogue (OUP 2011) and Catholic High Schools: Facing the New Realities (OUP 2011) Jan E. Stets is Professor and Director of the Social Psychology Research Laboratory at the University of California, Riverside. She is the former Director of the Sociology Program at the National Science Foundation, and a former co-editor of Social Psychology Quarterly.