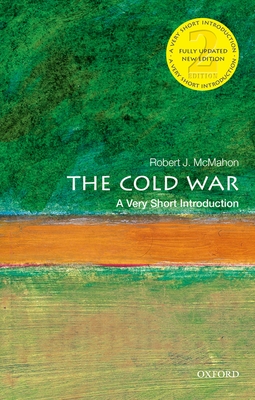 The Cold War dominated international life from the end of World War II to the fall of the Berlin Wall in 1989. But how did the conflict begin? Why did it move from its initial origins in Postwar Europe to encompass virtually every corner of the globe? And why, after lasting so long, did the war end
so suddenly and unexpectedly? Robert McMahon considers these questions and more, as well as looking at the legacy of the Cold War and its impact on international relations today. The Cold War: A Very Short Introduction is a truly international history, not just of the Soviet-American struggle at its heart, but also of the waves of decolonization, revolutionary nationalism, and state formation that swept the non-Western world in the wake of World War II. McMahon places the
'Hot Wars' that cost millions of lives in Korea, Vietnam, and elsewhere within the larger framework of global superpower competition. He shows how the United States and the Soviet Union both became empires over the course of the Cold War, and argues that perceived security needs and fears shaped
U.S. and Soviet decisions from the beginning--far more, in fact, than did their economic and territorial ambitions. He unpacks how these needs and fears were conditioned by the divergent cultures, ideologies, and historical experiences of the two principal contestants and their allies. Covering the
years 1945-1990, this second edition uses recent scholarship and newly available documents to offer a fuller analysis of the Vietnam War, the changing global politics of the 1970s, and the end of the Cold War. ABOUT THE SERIES: The Very Short Introductions series from Oxford University Press contains hundreds of titles in almost every subject area. These pocket-sized books are the perfect way to get ahead in a new subject quickly. Our expert authors combine facts, analysis, perspective, new ideas, and
enthusiasm to make interesting and challenging topics highly readable.

Robert J. McMahon, Ralph D. Mershon Professor of History Emeritus, Ohio State University Robert J. McMahon is the Ralph D. Mershon Professor of History Emeritus at Ohio State University. The author of several books on U.S. foreign relations, the Cold War, and the Vietnam War, he previously taught at the University of Florida and has held visiting professorships at Williams College, theUniversity of Virginia, University College Dublin, and the Free University (Berlin). McMahon served as president of the Society for Historians of American Foreign Relations in 2001.