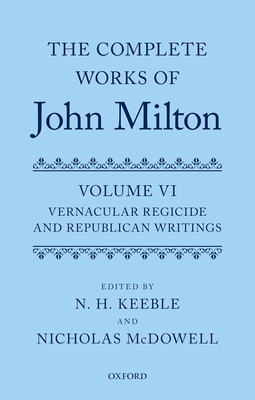 This is the fourth volume to be published in Oxford's 11-volume edition of the Complete Works of John Milton, the first complete scholarly edition for nearly 100 years. It brings together (for the first time in a single volume) Milton's English writing in prose on the political issues that exercised him throughout his life - civil and religious liberty, republicanism and the constitution of a free commonwealth, the rights and duties of citizens, resistance of tyranny and the role of military force in securing national stability. The eleven pieces here presented in chronological order, from The Tenure of Kings and Magistrates (1649) to Milton's last prose work, his translation of the proclamation announcing the election of John Sobieski as King of Poland (1674), articulate his responses to the unprecedented events of the seventeenth century - civil war, regicide, the Commonwealth, Cromwellian rule, the Restoration of monarchy and the restored Stuart regime -- events which shaped the social, political and religious structures of modern Britain. They do so with unrivalled polemical and rhetorical skill, instinct with revolutionary fervour and political idealism.

Each title is freshly edited from newly examined and collated copies of either the first and subsequent seventeenth-century editions or of the manuscript record to give the most accurate and authoritative texts. A headnote to each analyses and discusses (often with new evidence) its composition, production and reception. A very substantial general introduction sets the writings in the context of European intellectual history and of contemporary British controversy and polemic. References and allusions to events and to texts are elucidated by full and detailed annotation and commentary which takes full account of recent Milton scholarship but also often draws on original research. Taken together, these features constitute the definitive edition of these texts for the 21st century. Both editors are established seventeenth-century scholars with expertise particularly in the political and religious literature of the Civil War, Interregnum and Restoration periods.

N. H. Keeble is Professor Emeritus of English Studies at the University of Scotland, Stirling, from which he retired in 2010 as Senior Deputy Principal. His academic and research interests lie in English cultural (and especially literary and religious history) of the early modern period, 1500-1725. His publications in this field include studies of Richard Baxter: Puritan Man of Letters (1982), The Literary Culture of Nonconformity in later seventeenth-century England (1987), The Restoration: England in the 1660s (2002), a two-volume Calendar of the Correspondence of Richard Baxter (1991; with Geoffrey F. Nuttall) and editions of texts by Richard Baxter, John Bunyan, Daniel Defoe, Lucy Hutchinson and Andrew Marvell. He currently leads an AHRC funded project to prepare a scholarly edition of Richard Baxter's Reliquiae Baxterianae for publication by Oxford University Press. Nicholas McDowell is Professor of Early Modern Literature and Thought at the University of Exeter. His visiting positions have included Membership of the Institute for Advanced Study, Princeton. He is the author of The English Radical Imagination: Culture, Religion, and Revolution, 1630-1660 (OUP, 2003) and Poetry and Allegiance in the English Civil Wars: Marvell and the Cause of Wit (OUP, 2008), and he is the editor, with Nigel Smith, of The Oxford Handbook of Milton (OUP, 2009; paperback, 2011), which was awarded the 2009 Irene Samuel Award of the Milton Society of America for most distinguished collection. In 2007 he was awarded a Philip Leverhulme Prize by the Leverhulme Trust. He is currently writing an intellectual biography of Milton.