Poetry and Allegiance in the English Civil Wars: Marvell and the Cause of Wit 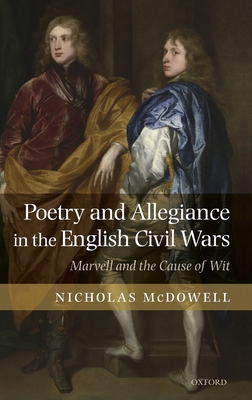 Poetry and Allegiance in the English Civil Wars: Marvell and the Cause of Wit

This book is about the things which could unite, rather than divide, poets during the English Civil Wars: friendship, patronage relations, literary admiration, and anti-clericalism. The central figure is Andrew Marvell, renowned for his "ambivalent" allegiance in the late 1640s. Little is known about Marvell's associations in this period, when many of his best-known lyrics were composed. The London literary circle which formed in 1647 under the patronage of the wealthy royalist Thomas Stanley included "Cavalier" friends of Marvell such as Richard Lovelace but also John Hall, a Parliamentarian propagandist inspired by reading Milton. Marvell is placed in the context of Stanley's impressive circle of friends and their efforts to develop English lyric capability in the absence of traditional court patronage. By recovering the cultural values that were shared by Marvell and the like-minded men with whom he moved in the literary circles of post-war London, we are more likely to find the reasons for their decisions about political allegiance. By focusing on a circle of friends and associates we can also get a sense of how they communicated with and influenced one another through their verse. There are innovative readings of Milton's sonnets and Lovelace's lyric verse, while new light is shed on the origins and audience not only of Marvell's early political poems, including the "Horatian Ode," but lyrics such as "To His Coy Mistress."

Nicholas McDowell grew up in Belfast and was educated at Cambridge and Oxford. He was a Research Fellow of Fitzwilliam College, Cambridge, before moving to the University of Exeter in 2001. He is the editor, with Nigel Smith, of The Oxford Handbook of Milton, a collection of newly-commissioned research essays by more than 30 leading scholars to mark the quatercentenary of Milton's birth in 2008. His research in the next few years will focus on the 12-volume Oxford Complete Works of John Milton, for which he is editing The Tenure of Kings and Magistrates, Observations Upon the Articles of Peace, and Eikonoklastes. These will appear in Volume 6: Vernacular Regicide and Republican Writings in 2011. In 2007 he was awarded a Philip Leverhulme Prize by the Leverhulme Trust in recognition of the international impact of his research.