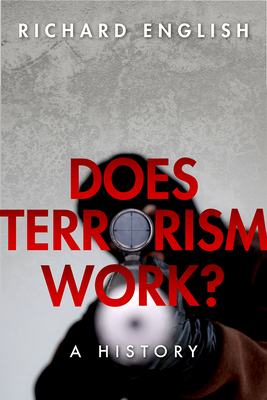 Terrorism is one of the most significant security threats that we face in the twenty-first century. Not surprisingly, there is now a plethora of books on the subject, offering definitions of what terrorism is and proffering advice on what causes it and how states should react to it.

But one of the most important questions about terrorism has, until now, been left remarkably under-scrutinized: does it work? Richard English now brings thirty years of professional expertise studying terrorism to the task of answering this complex--and controversial--question. Focussing principally on four of the most significant terrorist organizations of the last fifty years (al-Qaida, the Provisional IRA, Hamas, and ETA), and using a wealth of interview material with former terrorists as well as those involved in counter-terrorism, he argues that we need a far more honest understanding of the degree to which terrorism actually works--as well as a more nuanced insight into the precise ways in which it does so. Only then can we begin to grapple more effectively with what has become one of the most challenging and eye-catching issues of our time.

Richard English is Professor of Politics at Queen's University Belfast, where he is also Distinguished Professorial Fellow in the Senator George J. Mitchell Institute for Global Peace, Security and Justice. He is the author of numerous books, including the award-winning studies Armed Struggle: The History of the IRA (2003) and Irish Freedom: The History of Nationalism in Ireland (2006). His most recent book, Modern War: A Very Short Introduction, was published in 2013 by Oxford University Press. He is a frequent media commentator on terrorism and political violence, and on Irish politics and history, including work for the BBC, ITN, SKY NEWS, NPR, RTE, the Irish Times, the Times Literary Supplement, Newsweek, and the Financial Times.