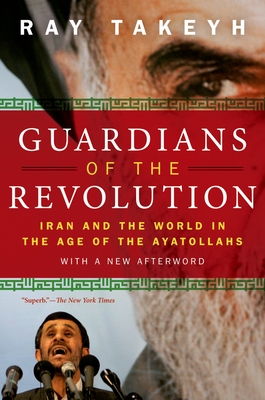 For over a quarter century, Iran has been one of America's chief nemeses. Ever since Ayatollah Khomeini overthrew the Shah in 1979, the relationship between the two nations has been antagonistic: revolutionary guards chanting against the Great Satan, Bush fulminating against the Axis of Evil, Iranian support for Hezbollah, and President Ahmadinejad blaming the U.S. for the world's ills.

The unending war of words suggests an intractable divide between Iran and the West, one that may very well lead to a shooting war in the near future. But as Ray Takeyh shows in this accessible and authoritative history of Iran's relations with the world since the revolution, behind the famous personalities and extremist slogans is a nation that is far more pragmatic--and complex--than many in the West have been led to believe. Takeyh explodes many of our simplistic myths of Iran as an intransigently Islamist foe of the West. Tracing the course of Iranian policy since the 1979 revolution, Takeyh identifies four distinct periods: the revolutionary era of the 1980s, the tempered gradualism following the death of Khomeini and the end of the Iran-Iraq war in 1989, the "reformist" period from 1997-2005 under President Khatami, and the shift toward confrontation and radicalism since the election of President Ahmadinejad in 2005. Takeyh shows that three powerful forces--Islamism, pragmatism, and great power pretensions--have competed in each of these periods, and that Iran's often paradoxical policies are in reality a series of compromises between the hardliners and the moderates, often with wild oscillations between pragmatism and ideological dogmatism. The U.S.'s task, Takeyh argues, is to find strategies that address Iran's objectionable behavior without demonizing this key player in an increasingly vital and volatile region. With its clear-sighted grasp of both nuance and historical sweep, Guardians of the Revolution will stand as the standard work on this controversial--and central--actor in world politics for years to come.

Ray Takeyh is a Senior Fellow for Middle Eastern Studies at the Council on Foreign Relations and the author of Hidden Iran and The Origins of the Eisenhower Doctrine . He lives near Washington, DC.