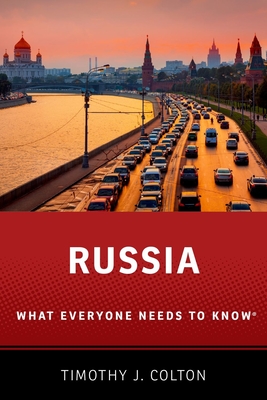 Today's Russia, also known as the Russian Federation, is often viewed as less powerful than the Soviet Union of the past. When stacked against other major nations in the present, however, the new Russia is a formidable if flawed player.

Russia: What Everyone Needs to Know(R) provides fundamental information about the origins, evolution, and current affairs of the Russian state and society. The story begins with Russia's geographic endowment, proceeds through its experiences as a kingdom and empire, and continues through the USSR's three-quarters of a century, and finally the shocking breakup of that regime a generation ago. Chapters on the failed attempt to reform Communism under Mikhail Gorbachev, the halting steps toward democratization under Boris Yeltsin, and the entrenchment of central controls under Vladimir Putin bring the reader into the contemporary scene and to headline-grabbing events such as Russia's annexation of the Crimean Peninsula from Ukraine and its military intervention in Syria. Drawing on trends within Russia and on ratings and rankings compiled by international organizations, Colton discusses the challenges facing the country--ranging from economic recession to demographic stress, political stagnation, and overextension in foreign policy--and to the realistic options for coping with them. The book shows that, although Russia is not imprisoned by its history, it is heavily influenced by it. Colton illustrates Russia's greatest strength and, ironically, its greatest weakness: the ability of its people to adapt themselves to difficult circumstances beyond their immediate control. Russia, as Putin has asserted, will not soon be a second edition of the United States or Britain. But, Colton shows, there are ways in which it could become a better version of itself.

Timothy J. Colton is Morris and Anna Feldberg Professor of Government and Russian Studies and the Chair of the Department of Government at Harvard University. He is the author of several books on Russia, most recently Yeltsin: A Life. He was a fellow at the Woodrow Wilson International Center for Scholars, a member of the Joint Committee on Soviet Studies of the Social Science Research Council and the American Council of Learned Societies, and vice-chairman of the National Council for East European, Russian, and Eurasian Research. He is currently a member of the editorial board of World Politics and Post-Soviet Affairs.