Shoddy: From Devil’s Dust to the Renaissance of Rags 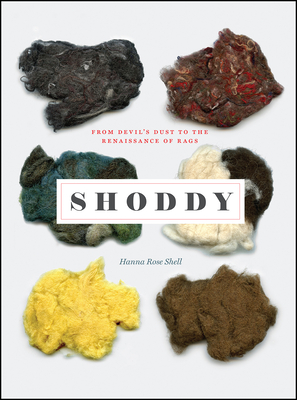 Shoddy: From Devil’s Dust to the Renaissance of Rags

The history of modern-day old clothes recycling begins with a thing called shoddy. Starting in the early 1800s, shoddy was the name given to a new material made from reclaimed wool, and to one of the earliest forms of industrial recycling. Old rags and leftover fabric clippings were ground to bits by a machine known as “the devil” and then re-used. Usually undisclosed, shoddy–also known as reworked wool–became suit jackets, army blankets, mattress stuffing, and much more. Shoddy is the afterlife of rags. And Shoddy, the book, reveals hidden worlds of textile intrigue.

In Shoddy: From Devil’s Dust to the Renaissance of Rags, Hanna Rose Shell takes readers on a journey to discover shoddy, from Haiti to the “shoddy towns” of West Yorkshire in England, to the United States, back in time to the British cholera epidemics and the American Civil War, and into agricultural fields, textile labs, and rag-shredding factories. Shell’s narrative is both literary and historical, drawing on an extraordinary range of sources, from court cases to military uniforms, mattress labels to medical textbooks, political cartoons to high art. Shoddy moves between genres, bringing richly drawn characters and unexpected objects to life. Along the way, shoddy becomes equally an evocative object and a portal into another world.

Almost since the time it first appeared, shoddy was both ubiquitous and controversial. In part because it was often so hard to detect, it was inherently suspicious. Public health experts worried about sanitation and disease—how could old clothes be disinfected? As well, the idea of wearing someone else’s old clothes so close to your own skin was discomforting in and of itself. Could you sleep peacefully knowing that your mattress was very likely to be stuffed with dead soldiers’ overcoats? The use of the term “virgin” wool, the idea of virginity in relation to clothes, in fact emerged as an effort by the wool industry to counter shoddy’s appeal: to make shoddy seem shoddy. Over time, shoddy would capture a host of personal, ethical, commercial, and societal failings. And yet, there was always, within shoddy, the alluring concept of regeneration, of what we today think of as conscious clothing, eco-fashion, sustainable textiles.

Shell exposes an interwoven tale of industrial espionage, political infighting, scientific inquiry, ethnic prejudices, and war profiteering. Discarded clothes may make many journeys over the course of several lifetimes. Not only in your garments, but under your rug, in your mattress pads, piano blankets, in the peculiar confetti-like stuffing in your mailing envelopes, even in the insulation in your walls. Though it began with wool, over the past century the shredding “devil” has turned to synthetics from nylon stockings to Kevlar. Shoddy is likely connected to something you are wearing right now. After reading, you will never use the word shoddy or think about your clothes, the environment, sustainability, or the intermingled world around you the same way again.