Writing for Social Scientists, Third Edition: How to Start and Finish Your Thesis, Book, or Article (Chicago Guides to Writing, Editing, and Publishing) 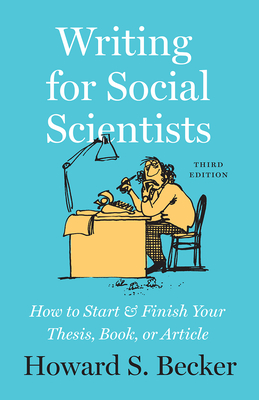 Writing for Social Scientists, Third Edition: How to Start and Finish Your Thesis, Book, or Article (Chicago Guides to Writing, Editing, and Publishing)

For more than thirty years, Writing for Social Scientists has been a lifeboat for writers in all fields, from beginning students to published authors. It starts with a powerful reassurance: Academic writing is stressful, and even accomplished scholars like sociologist Howard S. Becker struggle with it. And it provides a clear solution: In order to learn how to write, take a deep breath and then begin writing. Revise. Repeat.
This is not a book about sociological writing. Instead, Becker applies his sociologist’s eye to some of the common problems all academic writers face, including trying to get it right the first time, failing, and therefore not writing at all; getting caught up in the trappings of “proper” academic writing; writing to impress rather than communicate with readers; and struggling with the when and how of citations. He then offers concrete advice, based on his own experiences and those of his students and colleagues, for overcoming these obstacles and gaining confidence as a writer.

While the underlying challenges of writing have remained the same since the book first appeared, the context in which academic writers work has changed dramatically, thanks to rapid changes in technology and ever greater institutional pressures. This new edition has been updated throughout to reflect these changes, offering a new generation of scholars and students encouragement to write about society or any other scholarly topic clearly and persuasively.

As Becker writes in the new preface, “Nothing prepared me for the steady stream of mail from readers who found the book helpful. Not just helpful. Several told me the book had saved their lives; less a testimony to the book as therapy than a reflection of the seriousness of the trouble writing failure could get people into.” As academics are being called on to write more often, in more formats, the experienced, rational advice in Writing for Social Scientists will be an important resource for any writer’s shelf.