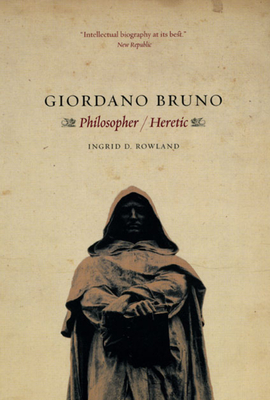 Giordano Bruno (1548–1600) is one of the great figures of early modern Europe, and one of the least understood. Ingrid D. Rowland’s biography establishes him once and for all as a peer of Erasmus, Shakespeare, and Galileo—a thinker whose vision of the world prefigures ours.

Writing with great verve and erudition, Rowland traces Bruno’s wanderings through a sixteenth-century Europe where every certainty of religion and philosophy has been called into question, and reveals how he valiantly defended his ideas to the very end, when he was burned at the stake as a heretic on Rome’s Campo de’ Fiori.

“Whatever else Bruno was, he was wild-minded and extreme, and Rowland communicates this, together with a sense of the excitement that his ideas gave him. . . . It’s that feeling for the explosiveness of the period, and [Rowland’s] admiration of Bruno for participating in it—indeed, dying for it—that is the central and most cherishable quality of the biography.”—Joan Acocella, New Yorker

“Rowland tells this great story in moving, vivid prose, concentrating as much on Bruno’s thought as on his life. . . . His restless mind, as she makes clear, not only explored but transformed the heavens.”—Anthony Grafton, New York Review of Books

“A marvelous feat of scholarship. . . . This is intellectual biography at its best.”—Peter N. Miller, New Republic

“An excellent starting point for anyone who wants to rediscover the historical figure concealed beneath the cowl on Campo de’ Fiori.”—Paula Findlen, Nation

Ingrid D. Rowland lives in Rome, where she teaches at the University of Notre Dame’s School of Architecture, and is a regular essayist for the New York Review of Books and the New Republic. She is the author of many books, including The Scarith of Scornello: A Tale of Renaissance Forgery, also published by the University of Chicago Press.