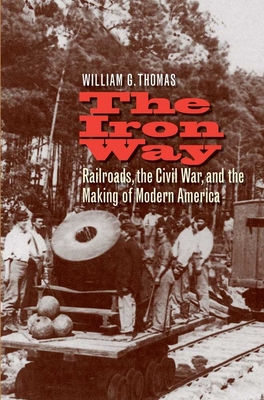 A new perspective on the central role of the railroads and slavery in the coming, fighting, and aftermath of the Civil War.

“A remarkably nuanced and brilliant interpretation of railroads and the Civil War. . . . Truly path-breaking.”—Vernon Burton, author of The Age of Lincoln

"Offers a series of bracing insights about the origins, shape and outcome of the Civil War. . . . Because it integrates military and social history so imaginatively, The Iron Way is a must-read for students, scholars and enthusiasts alike."—Civil War Monitor

Beginning with Frederick Douglass's escape from slavery in 1838 on the railroad, and ending with the driving of the golden spike to link the transcontinental railroad in 1869, this book charts a critical period of American expansion and national formation, one largely dominated by the dynamic growth of railroads and telegraphs. William G. Thomas brings new evidence to bear on railroads, the Confederate South, slavery, and the Civil War era, based on groundbreaking research in digitized sources never available before. The Iron Way revises our ideas about the emergence of modern America and the role of the railroads in shaping the sectional conflict.

Both the North and the South invested in railroads to serve their larger purposes, Thomas contends. Though railroads are often cited as a major factor in the Union's victory, he shows that they were also essential to the formation of "the South" as a unified region. He discusses the many—and sometimes unexpected—effects of railroad expansion and proposes that America's great railroads became an important symbolic touchstone for the nation's vision of itself.

Please visit the Railroads and the Making of Modern America website at http://railroads.unl.edu.

William G. Thomas is professor of history and the John and Catherine Angle Chair in the Humanities at the University of Nebraska-Lincoln. He lives in Lincoln, NE.