The Polymath: A Cultural History from Leonardo da Vinci to Susan Sontag 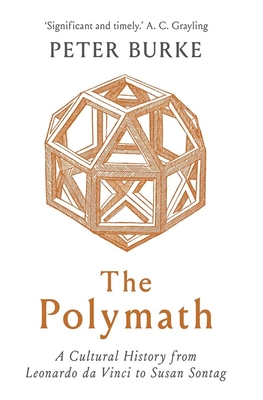 The Polymath: A Cultural History from Leonardo da Vinci to Susan Sontag

From Leonardo Da Vinci to Oliver Sacks: the first history of the western polymath, from the Renaissance to the present

From Leonardo Da Vinci to John Dee and Comenius, from George Eliot to Oliver Sacks and Susan Sontag, polymaths have moved the frontiers of knowledge in countless ways. But history can be unkind to scholars with such encyclopedic interests. All too often these individuals are remembered for just one part of their valuable achievements.

In this engaging, erudite account, renowned cultural historian Peter Burke argues for a more rounded view. Identifying 500 western polymaths, Burke explores their wide-ranging successes and shows how their rise matched a rapid growth of knowledge in the age of the invention of printing, the discovery of the New World and the Scientific Revolution. It is only more recently that the further acceleration of knowledge has led to increased specialization and to an environment that is less supportive of wide-ranging scholars and scientists.

Spanning the Renaissance to the present day, Burke changes our understanding of this remarkable intellectual species.

Peter Burke is emeritus professor of cultural history at Cambridge University. He is the author of many distinguished books that have been translated into more than thirty languages.