Dollars for Life: The Anti-Abortion Movement and the Fall of the Republican Establishment 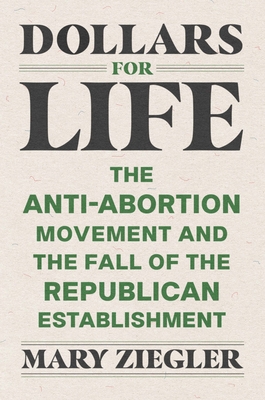 Dollars for Life: The Anti-Abortion Movement and the Fall of the Republican Establishment

“A timely and expert guide to one of today’s most hot-button political issues.”—Publishers Weekly (starred review)

“A sober, knowledgeable scholarly analysis of a timely issue.”—Kirkus Reviews

“[Ziegler’s] argument [is] that, over the course of decades, the anti-abortion movement laid the groundwork for an insurgent candidate like Trump.”—Jennifer Szalai, New York Times

The modern Republican Party is the party of conservative Christianity and big business—two things so closely identified with the contemporary GOP that we hardly notice the strangeness of the pairing. Legal historian Mary Ziegler traces how the anti-abortion movement helped to forge and later upend this alliance. Beginning with the Supreme Court’s landmark decision in Buckley v. Valeo, right-to-lifers fought to gain power in the GOP by changing how campaign spending—and the First Amendment—work. The anti-abortion movement helped to revolutionize the rules of money in U.S. politics and persuaded conservative voters to fixate on the federal courts. Ultimately, the campaign finance landscape that abortion foes created fueled the GOP’s embrace of populism and the rise of Donald Trump. Ziegler offers a surprising new view of the slow drift to extremes in American politics—and explains how it had everything to do with the strange intersection of right-to-life politics and campaign spending.

Mary Ziegler is a professor of law at UC Davis School of Law. She is one of the leading historians of the abortion debate and the author of three prior books on U.S. law and politics, including the award-winning After Roe: The Lost History of the Abortion Debate.