A Modern Man: The Best of George Carlin 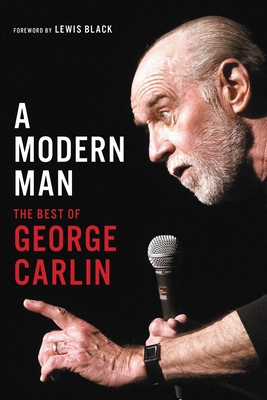 A Modern Man: The Best of George Carlin

By  George Carlin , Foreword by  Lewis Black
$ 17.99
Likely On Our Shelves

A new collection of greatest hits from one of the greatest comedians of our time, George Carlin, now the subject of the HBO documentary George Carlin’s American Dream, directed by Judd Apatow and Michael Bonfiglio

You can’t talk about comedy legends without talking George Carlin. Named the greatest standup of all time by XM Radio’s “All Time Comedy Greats” (and #2 by both Comedy Central and Rolling Stone), Carlin garnered multiple gold records, 4 Grammys, 6 Emmy nominations, and the Mark Twain Prize for American Humor. He was the first host of SNL, appeared on the Tonight Show some 130 times, and acted in beloved films like Bill and Ted’s Excellent Adventure and Dogma. Dubbed “the dean of counterculture comedians,” there was no one like George Carlin.

Featuring a foreword by Lewis Black and an introduction by Carlin's longtime best friend and manager, A Modern Man is a perfect introduction for new fans and a must-have for longtime fans, showcasing the longevity, range, and—above all—hilarity of the master. Filled with thoughts, musings, questions, lists, beliefs, curiosities, monologues, assertions, assumptions, and other delicious verbal ordeals, it is drop-dead funny tour through Carlin’s singular mind. More than ten years after his death, Carlin’s characteristically ironic takes on life's annoying universal truths remain thoughtful, fearless, and somehow more relevant than ever.

George Carlin (1937-2008), a celebrated stand-up comedian, actor, social critic and author, was best known for his irreverent, dark comedy and reflections on American society. Carlin was once dubbed “the dean of counterculture comedians” and has been regarded as one of the most influential stand-up comics of his time. He filmed his first HBO special in 1977 and appeared on “The Tonight Show” over 130 times. The documentary will feature a unique mix of conversations with Carlin’s family and friends, material from his stand-up specials, TV appearances and personal archive.

Lewis Black is the hugely popular and New York Times bestselling author, stand-up comedian, actor, and playwright. Besides appearing regularly on The Daily Show (in his own segment, "Back in Black"), he has written and starred in a string of successful HBO and Comedy Central specials and one-man Broadway shows. He's won a Grammy, an Emmy, and an American Comedy Award. Born near Washington, D.C., Black graduated from the University of North Carolina at Chapel Hill, and has a master's degree from the Yale School of Drama.