Watch and Learn: How I Turned Hollywood Upside Down with Netflix, Redbox, and MoviePass—Lessons in Disruption 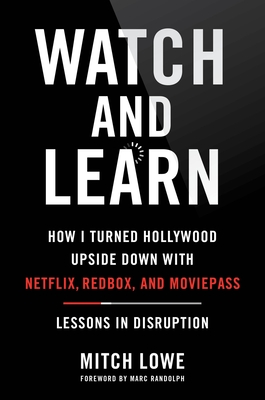 Watch and Learn: How I Turned Hollywood Upside Down with Netflix, Redbox, and MoviePass—Lessons in Disruption

Get an inside perspective on the entertainment distribution revolution from an executive who lived it with Netflix, Redbox, and MoviePass, and who continues to consult, speak, and share his unique understanding of how to disrupt the status quo and adapt to what the customer wants.

When Warner Brothers announced they'd be streaming all their new 2021 theatrical releases simultaneously on HBO Max, it sent shock waves through the entertainment industry. But it was also an inevitable decision, and one soon to be copied by the other major studios scrambling to keep up with just how radically the way we watch movies has changed over the past two decades. Mitch Lowe has been at the forefront of that revolution, helping to shape a world where you can watch whatever movie, wherever and whenever you want. Lowe was one of the founding executives at Netflix; served as president of Redbox, the DVD rental kiosks outside Walmart and supermarkets around the country; and as the CEO of MoviePass, the much-lauded monthly movie theater subscription that, even as it failed, changed the way movie theaters operate forever. Along the way, Lowe learned that genuine disruption doesn't always mean aggressive upheaval and overnight success. More often than not, true disruption is the result of perseverance, imagination, and a constantly evolving quest to understand what it is that customers really want.

In Watch and Learn, Mitch Lowe will tell the inside story of the dramatic evolution of the entertainment business, from the days of early cable television, Beta, and VHS to a world where consumers have infinite choice and control of the movies they see. He'll also share personal stories from a wild ride that began with his dropping out of high school and living on the edge of conflict in an Israeli kibbutz, smuggling goods and money between Europe and the Middle East, and ultimately embracing Buddhism. Along the way readers will gain essential insights and lessons that extend far beyond the entertainment industry, rooted in Lowe's keen sense for seeing ahead of the curve and intuiting customer needs, and applicable to anyone who has ambitions to disrupt and succeed: from leading with love and imagination, to reinforcing the intrinsic power of gut instinct with data and testing, to the ultimate competitive advantage of getting closest to the customer, and the value of perseverance and tinkering.

"Whether you're just starting out in business or already have a long track record of success, you'll find plenty to learn from a man who has seen it all, done most of it, and met everyone. You'll see . . . there's nobody else like Mitch." —from the Foreword by Marc Randolph, Co-founder and First CEO of Netflix, and author of That Will Never Work: The Birth of Netflix and the Amazing Life of an Idea

Mitch Lowe was a founding executive at Netflix, where he served as Entertainment Domain Expert and as Vice President of Business Development & Strategic Alliances from 1998 to 2003. In 2003 Mitch joined the investment group at McDonald’s to co-lead as COO and then as President, at Redbox, the DVD vending machine rental service that under his leadership grew to 35,000 kiosks across the U.S. with revenue growing from less than $1M in 2003 to $1.5B in revenue in 2011. Lowe became CEO of MoviePass in 2016, a movie theater subscription service that acquired three million subscribers in eight months.

Lowe has also invested in start-ups in the entertainment, blockchain, and social spaces. As a speaker, he has presented to audiences as large as 7,000 around the world, and was ranked by BigSpeak in their top 5 most-booked speakers of 2019. Lowe has since been delivering keynotes online, where audiences from Dell to SAP to Microsoft have asked him to address the changing role of innovation and leadership in our “new normal.” His media appearances include Forbes, Bloomberg BusinessWeek, NPR, Variety, Vice, and The Wall Street Journal. He lives in Miami Beach.