The Queer Advantage: Conversations with LGBTQ+ Leaders on the Power of Identity 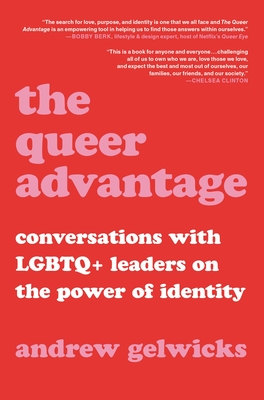 The Queer Advantage: Conversations with LGBTQ+ Leaders on the Power of Identity

By  Andrew Gelwicks
Hardcover
$ 30.00
Out of Stock In Store

Meet the LGBTQ+ dealmakers, trailblazers, and glass-ceiling breakers in business, politics, and beyond.
The people who are creating national public policy, running billion-dollar tech enterprises, and winning Olympic medals. Andrew Gelwicks interviews the leaders who have forged their own paths and changed the world.

From Troye Sivan to Margaret Cho, George Takei to Billie Jean King, Shangela to Adam Rippon, each person credits their queer identity with giving them an edge in their paths to success. Their stories brim with the hard-won lessons gained over their careers. With variances in age, background, careers, and races, key themes shine through:

Collecting incisive, deeply personal conversations with LGBTQ+ trailblazers about how they leveraged the challenges and insights they had as relative outsiders to succeed in the worlds of business, tech, politics, Hollywood, sports and beyond, The Queer Advantage celebrates the unique, supercharged power of queerness.

Andrew Gelwicks is a celebrity fashion stylist. He started in the fashion department at GQ, and later worked in celebrity booking for Teen VOGUE. He also has extensive experiences in public relations, marketing and celebrity relations at Hearst Magazines, Michael Kors, and Starworks Group.

Andrew has been featured internationally in Forbes, WWD, The Hollywood Reporter, InStyle, Town & Country, People, Life & Style, Amuze, and El País, among others. He was recently named by Bumble as one of the 100 Most Inspiring New Yorkers.

His writing has been published in The Hollywood Reporter, OUT, The Huffington Post, Harper's BAZAAR, Teen VOGUE, among others.