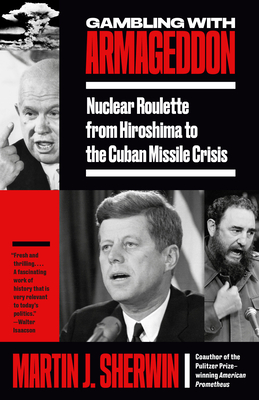 From the Pulitzer Prize-winning author of American Prometheus comes the first effort to set the Cuban Missile Crisis, with its potential for nuclear holocaust, in a wider historical narrative of the Cold War—how such a crisis arose and why, at the very last possible moment, it never happened.

“Fresh and thrilling.... A fascinating work of history that is very relevant to today’s politics.” —Walter Isaacson, bestselling author of The Code Breaker

Pulitzer Prize-winning author Martin J. Sherwin introduces a dramatic new view of how luck and leadership avoided a nuclear holocaust during the October 1962 Cuban missile crisis. Set within the sweep of the Cold War and its nuclear history, every chapter of this gripping narrative of the origins and resolution of history’s most dangerous thirteen days offers lessons and a warning for our time. Gambling with Armageddon presents a riveting, page turning account of the crisis as well as an original exploration of the evolving place of nuclear weapons in the Post-World War II world.

MARTIN J. SHERWIN, was University Professor of History at George Mason University and the author of A World Destroyed: Hiroshima and Its Legacies, winner of the Stuart L. Bernath and the American History Book prizes, and the coauthor, with Kai Bird, of American Prometheus: The Triumph and Tragedy of J. Robert Oppenheimer, which won the Pulitzer Prize for biography in 2006 as well as the National Book Critics Circle Award and the Duff Cooper Prize. He died in 2021.