Although Of Course You End Up Becoming Yourself: A Road Trip with David Foster Wallace 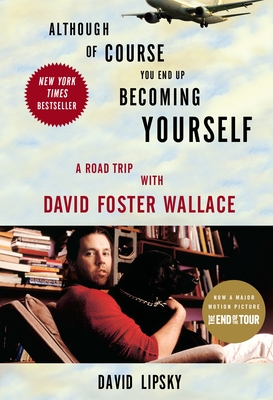 Although Of Course You End Up Becoming Yourself: A Road Trip with David Foster Wallace

An indelible portrait of David Foster Wallace, by turns funny and inspiring, based on a five-day trip with award-winning writer David Lipsky during Wallace’s Infinite Jest tour

In David Lipsky’s view, David Foster Wallace was the best young writer in America. Wallace’s pieces for Harper’s magazine in the ’90s were, according to Lipsky, “like hearing for the first time the brain voice of everybody I knew: Here was how we all talked, experienced, thought. It was like smelling the damp in the air, seeing the first flash from a storm a mile away. You knew something gigantic was coming.”

Then Rolling Stone sent Lipsky to join Wallace on the last leg of his book tour for Infinite Jest, the novel that made him internationally famous. They lose to each other at chess. They get iced-in at an airport. They dash to Chicago to catch a make-up flight. They endure a terrible reader’s escort in Minneapolis. Wallace does a reading, a signing, an NPR appearance. Wallace gives in and imbibes titanic amounts of hotel television (what he calls an “orgy of spectation”). They fly back to Illinois, drive home, walk Wallace’s dogs. Amid these everyday events, Wallace tells Lipsky remarkable things—everything he can about his life, how he feels, what he thinks, what terrifies and fascinates and confounds him—in the writing voice Lipsky had come to love. Lipsky took notes, stopped envying him, and came to feel about him—that grateful, awake feeling—the same way he felt about Infinite Jest. Then Lipsky heads to the airport, and Wallace goes to a dance at a Baptist church.

A biography in five days, Although Of Course You End Up Becoming Yourself is David Foster Wallace as few experienced this great American writer. Told in his own words, here is Wallace’s own story, and his astonishing, humane, alert way of looking at the world; here are stories of being a young writer—of being young generally—trying to knit together your ideas of who you should be and who other people expect you to be, and of being young in March of 1996. And of what it was like to be with and—as he tells it—what it was like to become David Foster Wallace.

"If you can think of times in your life that you’ve treated people with extraordinary decency and love, and pure uninterested concern, just because they were valuable as human beings. The ability to do that with ourselves.  To treat ourselves the way we would treat a really good, precious friend. Or a tiny child of ours that we absolutely loved more than life itself.  And I think it’s probably possible to achieve that.  I think part of the job we’re here for is to learn how to do it.  I know that sounds a little pious."
—David Foster Wallace

DAVID LIPSKY is a contributing editor at Rolling Stone.  His fiction and nonfiction have appeared in The New Yorker, Harper's Magazine, The Best American Short Stories, The Best American Magazine Writing, the New York Times, The New York Times Book Review, and many other publications.  He contributes as an essayist to NPR's All Things Considered and is the recipient of a Lambert Fellowship, a Media Award from GLAAD, and a National Magazine Award.  He's the author of the novel The Art Fair; a collection of stories, Three Thousand Dollars; and the bestselling nonfiction book Absolutely American, which was a Time magazine Best Book of the Year.