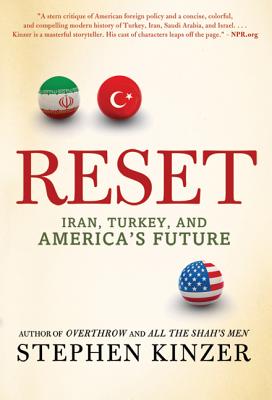 By  Stephen Kinzer
Paperback
$ 19.99
Out of Stock In Store

Reset introduces an astonishing parade of characters: sultans, shahs, oil tycoons, mullahs, women of the world, liberators, oppressors, and dreamers of every sort. Woven together into a dazzling panorama, they help us see the Middle East in a new way—and lead to startling proposals for how the world's most volatile region might be reshaped.

In this paradigm-shifting book, Stephen Kinzer argues that the United States needs to break out of its Cold War mindset and find new partners in the Middle East. Only two Muslim countries in the Middle East have long experience with democracy: Iran and Turkey. They are logical partners for the United States. Besides proposing this new "power triangle," Kinzer tells the turbulent story of America's relations with its traditional partners in the Middle East, Israel and Saudi Arabia, and argues they must be reshaped to fit the new realities of the twenty-first century.

Kinzer's provocative new view of the Middle East—and of America's role there—will richly entertain while moving a vital policy debate beyond the stale alternatives of the last fifty years.

Stephen Kinzer is the author of many books, including The True Flag, The Brothers, Overthrow, and All the Shah’s Men. An award-winning foreign correspondent, he served as the New York Times bureau chief in Nicaragua, Germany, and Turkey. He is a senior fellow at the Watson Institute for International and Public Affairs at Brown University, and writes a world affairs column for the Boston Globe. He lives in Boston.