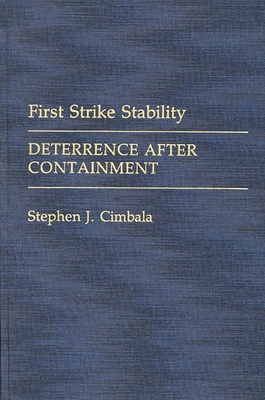 The lifting of the Iron Curtain in response to pressures for democratic reform in the Eastern Bloc nations and the refusal of General Secretary Mikhail Gorbachev to use the Red Army to police countries of the Warsaw Pact have led to a radically changed international environment. Preceded by over 40 years of peace and stability, unprecedented in the history of modern Europe, the Cold War ended in a climate of upheaval and uncertainty. This volume addresses issues associated with the political and military vacuum created by recent events and explores in depth a problem of military uncertainty: first strike stability. Stephen J. Cimbala argues that war in a system undergoing rapid change, including reductions in forces and political realignment, remains disturbingly possible due to the unforeseeable, inadvertent, and uncontrollable uncertainties that plague decision making and military planning in Washington, Moscow, and other international power centers, hence, first strike instability. This timely volume clarifies the kind of bargain superpowers and their allies have made in regard to nuclear weapons and command systems. Cimbala provides enhanced understandings of the concept and practice of nuclear deterrence and of first strike stability in a post-Cold War world that can help direct arms control efforts toward those areas that are most important to actual security.

Broad aspects of the problem of first strike stability are set forth in the first chapter which also anticipates some of the connections between political and military levels of analysis discussed in the conclusion. Chapter two introduces the concepts of the state of nature and the state of war, explains how they apply to the problem of first strike stability, and why the possibility of war, including nuclear war, cannot be excluded. Chapter three focuses on the New Soviet Thinking and why the probability of accidental and inadvertent war and escalation is not affected by reducing the levels of armaments alone. Chapter four emphasizes the problems facing the United States and NATO, and the approaches to escalation control which NATO assumes will be implemented, should deterrence fail. The results of the theoretical and administrative confusion over approaches to escalation control, outlined in chapter four, reappear in chapter five in the form of problems for war termination. The controversial issue of eliminating nuclear deterrence, with emphasis on the proposal for elimination by preclusive antinuclear strategic defenses is the focus of chapter six. The final chapter reviews the implications of the preceding chapters and arrives at some startling conclusions. Scholars and students of military affairs, political scientists, government officials, and members of the military establishment will find the up-to-the-minute information and judgements contained in First Strike Stability invaluable aids to their own decision making on this profoundly important world issue.

STEPHEN J. CIMBALA is a Professor of Political Science at Pennsylvania State University. He is the author of many works in military studies, including Strategic Impasse: Offense, Defense, Deterrence Theory and Practice (1989) and Nuclear Endings, Stopping War on Time (1989). He is a member of the Inter-University Seminar on Armed Forces and Society, International Studies Association, Arms Control Association, and other professional organizations in the field of defense studies.