Next Man Up: A Year Behind the Lines in Today's NFL 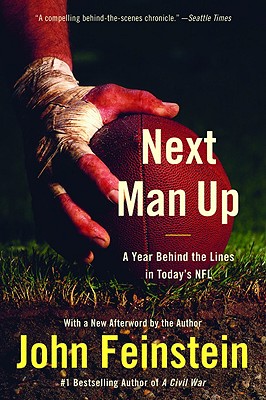 Next Man Up: A Year Behind the Lines in Today's NFL

In the NFL there is only one certainty: that every day, someone will have to be the Next Man Up. Football is an unrelentingly punishing sport, played and practiced at undiminished intensity, and it devours its players. Confronting injuries, trades, and the grim reality of competition, every NFL team prepares constantly for the likelihood -- the certainty -- that even franchise players can go down at any time. And someone new must be ready, trained, and primed to step in at the highest level.

Bestselling sportswriter John Feinstein persuaded one NFL team to lift the extraordinary secrecy that shrouds the sport and let him see how a team operates at the closest level. One team let him join every practice, every coaches' meeting, every players' gathering, every strategy debate. From the give-and-take of draft day, into the grinder of summer training camps, and from 100-degree practice games to the last game in frigid conditions, Feinstein reveals how a football team works -- or fails to work -- as no writer has done before.

Next Man Up unveils rituals (what a coach tells a player at the moment he cuts him); rules (the inanities of league-appointed "uniform Nazis"); conflicts (the scouts vs. the coaches, the general managers vs. the agents, the offense vs. the defense, the special teams coaches vs. everybody); money (how much a journeyman makes, and how his life differs from the multi-million-dollar-a-year star players)-every nuance of a team's life, from the owner's goals to the coach's day-to-day travails to the feeling of the sleet-soaked ball in the hands of a receiver on artificial turf.

The access John Feinstein enjoyed allows him to discuss with equal understanding the owner's management strategy, the coaches' and coordinators' plans for each new game, and how it all affects the players themselves. Anyone who loves football -- any team, in any era -- will savor the thousands of details revealed here for the first time, and the extraordinary drama that goes into following week after week, the most sensational sport in America.

John Feinstein is the author of many widely acclaimed and bestselling books on sports, including One on One, Moment of Glory, Are You Kidding Me?, Living on the Black, Tales from Q School, Last Dance, Next Man Up, Let Me Tell You a Story (with Red Auerbach), Caddy for Life, Open, The Punch, The Last Amateurs, The Majors, A Good Walk Spoiled, A Civil War, A Season on the Brink, Play Ball, and Hard Courts. He is also the author of five sports mystery novels for young readers. He writes for the Washington Post, Washingtonpost.com, and Golf Digest, and is a regular commentator on The Golf Channel.