I Even Funnier: A Middle School Story (I Funny #2) 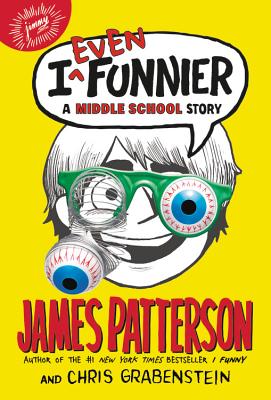 I Even Funnier: A Middle School Story (I Funny #2)

In James Patterson's follow-up to I Funny, middle schooler Jamie Grimm is ready for the national comedy semi-finals. . . but when his family and friends need his help, will he have to put his dreams on hold?
In this follow up to the #1 New York Times bestseller I Funny, middle schooler Jamie Grimm has big dreams of being the best stand-up comic in the world-and he won't let the fact that he's wheelchair-bound stand in his way. After winning the New York state finals in the Planet's Funniest Kid Comic Contest, Jamie's off to Boston to compete in the national semi-finals.
But when one of his best buddies runs into trouble at school and a sudden family health scare rears its head, Jamie has to put his comedic ambitions on hold and stand by the people he cares about. Can Jamie pass up the big competition for the sake of his friends and family?

James Patterson holds the Guinness World Record for the most #1 New York Times bestsellers, and his books have sold more than 350 million copies worldwide. A tireless champion of the power of books and reading, Patterson created a children's book imprint, JIMMY Patterson, whose mission is simple: "We want every kid who finishes a JIMMY Book to say, 'PLEASE GIVE ME ANOTHER BOOK.'" He has donated more than one million books to students and soldiers and funds over four hundred Teacher Education Scholarships at twenty-four colleges and universities. He has also donated millions to independent bookstores and school libraries. Patterson invests proceeds from the sales of JIMMY Patterson Books in pro-reading initiatives.