My Name Is Malala 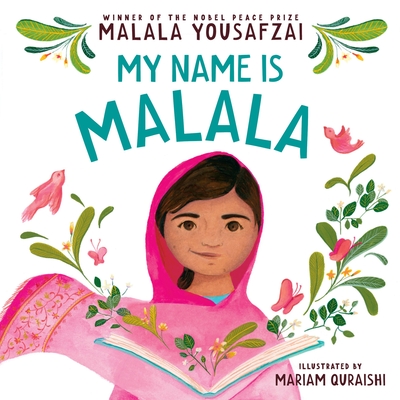 My Name Is Malala

By  Malala Yousafzai , By (artist)  Mariam Quraishi
$ 8.99
Pre-Order (Not Yet Published)

In her first board book, Nobel Prize laureate Malala Yousafzai introduces herself and her story to inspire the next generation of readers and leaders.

With simple text alongside irresistible art, Nobel Prize laureate and education activist Malala Yousafzai's first board book offers parents and educators a way to show that extraordinary figures are real people who are both relatable and inspiring. Malala is a daughter, a sister, a friend, a student, and, of course, an activist.

The last spread features a brief bio to provide more context for parents, caretakers, and educators who want to start a conversation about Malala's activism.

Malala Yousafzai is a cofounder and board member of Malala Fund. Malala began her campaign for education at age eleven, when she anonymously blogged for BBC Urdu about life under the Taliban in Pakistan's Swat Valley. Inspired by her father's activism, Malala soon began advocating publicly for girls' education, attracting international media attention and awards. At age fifteen, she was attacked by the Taliban for speaking out. Malala recovered in the United Kingdom and continued her fight for girls. In 2013, she founded Malala Fund with her father, Ziauddin. A year later, Malala received the Nobel Peace Prize in recognition of her efforts to see every girl complete twelve years of free, safe, and quality education. She is a graduate of Oxford University, with a degree in philosophy, politics, and economics. Malala's books include I Am Malala: How One Girl Stood Up for Educationand Changed the World, We Are Displaced, and Malala's Magic Pencil.

Mariam Quraishi is an illustrator and designer based in New York City. A graduate of the Rhode Island School of Design, she works in watercolor and gouache. When she’s not thinking about books you can find her day dreaming about the flowers from her hometown in Karachi, Pakistan  and tending to her many orchid plants. Mariam is also the illustrator of the picture book ONE WISH: Fatima Al-Fihri and the World’s Oldest University. You can visit her online at mariamquraishi.com.