I Funny: School of Laughs 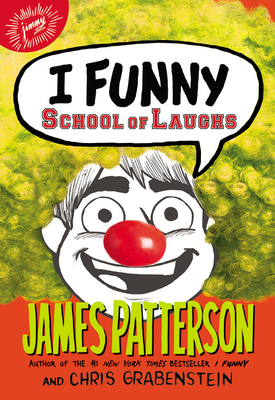 I Funny: School of Laughs

By  James Patterson , With  Chris Grabenstein , Illustrated By  Jomike Tejido
Hardcover
$ 13.99
Out of Stock In Store (Available to Order)

To save his school library, Jamie Grimm teaches other kids how to tell jokes in a comedy class -- but it's tougher than he expects in this funny book for kids of all ages.
Teaching other kids how to be funny is the toughest gig that Jamie Grimm has ever had, and with the highest stakes. If he fails, his school library will be shut down for good!
Even though he has a national contest trophy and a TV show under his belt, Jamie Grimm isn't one to sit back and relax. When his school has a major funding crisis, Jamie hits on a bright idea to save the day -- a comedy class for the other students. Little does he know that making jokes and teaching jokes are two very different things . . . and he's only good at one of them. With the fate of his school's library on his shoulders, Jamie has to dig deep to see if he has what it takes to succeed at his most difficult challenge yet.

James Patterson received the Literarian Award for Outstanding Service to the American Literary Community at the 2015 National Book Awards. He holds the Guinness World Record for the most #1 New York Times bestsellers, including Middle School and I Funny, and his books have sold more than 325 million copies worldwide. A tireless champion of the power of books and reading, Patterson created a children's book imprint, JIMMY Patterson, whose mission is simple: "We want every kid who finishes a JIMMY Book to say, 'PLEASE GIVE ME ANOTHER BOOK.'" He has donated more than one million books to students and soldiers and funds over four hundred Teacher Education Scholarships at twenty-four colleges and universities. He has also donated millions to independent bookstores and school libraries. Patterson invests his proceeds from the sales of JIMMY Patterson Books in pro-reading initiatives.