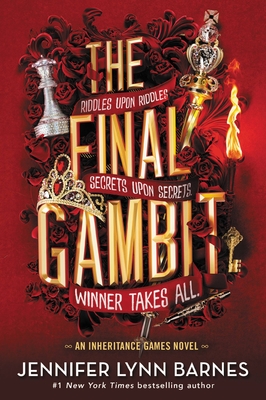 By  Jennifer Lynn Barnes
Paperback
$ 11.99
Pre-Order (Not Yet Published)

Avery’s fortune, life, and loves are on the line in the game that everyone is talking about.

But as the clock ticks down to the moment when Avery will become the richest teenager on the planet, trouble arrives in the form of a visitor who needs her help—and whose presence in Hawthorne House could change everything. It soon becomes clear that there is one last puzzle to solve, and Avery and the Hawthorne brothers are drawn into a dangerous game against an unknown and powerful player.

Secrets upon secrets. Riddles upon riddles. In this game, there are hearts and lives at stake—and there is nothing more Hawthorne than winning.

Jennifer Lynn Barnes is the #1 New York Times bestselling author of more than twenty acclaimed young adult novels, including The Inheritance Games trilogy, Little White Lies, Deadly Little Scandals, The Lovely and the Lost, and The Naturals series: The Naturals, Killer Instinct, All In, Bad Blood, and the e-novella, Twelve. Jen is also a Fulbright Scholar with advanced degrees in psychology, psychiatry, and cognitive science. She received her Ph.D. from Yale University in 2012 and was a professor of psychology and professional writing at the University of Oklahoma for many years. She invites you to her online at www.jenniferlynnbarnes.com or follow her on Twitter @jenlynnbarnes.