You Do You: How to Be Who You Are and Use What You've Got to Get What You Want (A No F*cks Given Guide) 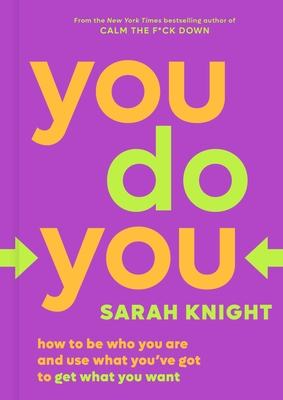 You Do You: How to Be Who You Are and Use What You've Got to Get What You Want (A No F*cks Given Guide)

From the New York Times bestselling author of The Life-Changing Magic of Not Giving a F*ck and Get Your Sh*t Together comes more straight talk about how to stand up for who you are and what you really want, need, and deserve -- showing when it's okay to be selfish, why it's pointless to be perfect, and how to be "difficult."

Being yourself should be easy, yet too many of us struggle to live on other people's terms instead of our own. Rather than feeling large and in charge, we feel little and belittled.

Sound familiar? Bestselling "anti-guru" Sarah Knight has three simple words for you: YOU DO YOU.

It's time to start putting your happiness first -- and stop letting other people tell you what to do, how to do it, or why it can't be done. And don't panic! You can do it without losing friends and alienating people. Knight delivers her trademark no-bullsh*t advice about:

The Tyranny of "Just Because" The social contract and how to amend it Turning "flaws" into strengths -- aka "mental redecorating" Why it's not your job to be nice Letting your freak flag fly How to take risks, silence the doubters, and prove the haters wrong

Sarah Knight's first book, The Life-Changing Magic of Not Giving a F*ck, has been published in 23 languages and counting, and her TEDx talk, "The Magic of Not Giving a F*ck," has more than two million views. The second book in the No F*cks Given Guide series, Get Your Sh*t Together, is a New York Times bestseller, and her third, You Do You, was published in November 2017. Her writing has also appeared in Glamour, Harper's Bazaar, Marie Claire, Red, Refinery29, and elsewhere.

After quitting her corporate job in 2015 to pursue a freelance life, she moved from Brooklyn, New York, to the Dominican Republic, where she currently resides with her husband and a sh*tload of lizards.