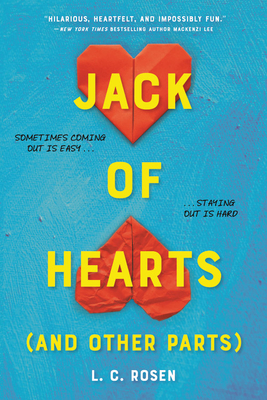 Riverdale meets Love, Simon in this modern, fresh, YA debut about an unapologetically queer teen working to uncover a blackmailer threatening him back into the closet.

Jack has a lot of sex--and he's not ashamed of it. While he's sometimes ostracized, and gossip constantly rages about his sex life, Jack always believes that "it could be worse."

But then, the worse unexpectedly strikes: When Jack starts writing a teen sex advice column for an online site, he begins to receive creepy and threatening love letters that attempt to force Jack to curb his sexuality and personality. Now it's up to Jack and his best friends to uncover the stalker--before their love becomes dangerous.

Ground-breaking and page-turning, Jack of Hearts (and other parts) celebrates the freedom to be oneself, especially in the face of adversity.

L. C. Rosen, also known as Lev Rosen, has written several books for adults and children, but this novel is his YA debut. His books have been featured on numerous Best of the Year lists and nominated for several awards. He lives in New York City with his husband and a very small cat.