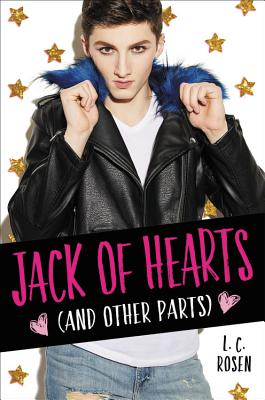 Riverdale meets Love, Simon in this modern, fresh, YA debut about an unapologetically queer teen working to uncover a blackmailer threatening him back into the closet.

Jack has a lot of sex--and he's not ashamed of it. While he's sometimes ostracized, and gossip constantly rages about his sex life, Jack always believes that "it could be worse."

But then, the worse unexpectedly strikes: When Jack starts writing a teen sex advice column for an online site, he begins to receive creepy and threatening love letters that attempt to force Jack to curb his sexuality and personality. Now it's up to Jack and his best friends to uncover the stalker--before their love becomes dangerous.

Ground-breaking and page-turning, Jack of Hearts (and other parts) celebrates the freedom to be oneself, especially in the face of adversity.

Lev Rosen is the author of books for all ages. Two for adults: All Men of Genius (Amazon Best of the Month, Audie Award Finalist) and Depth (Amazon Best of the Year, Shamus Award Finalist, Kirkus Best Science Fiction for April). Two middle-grade books: Woundabout (illustrated by his brother, Ellis Rosen), and The Memory Wall. And two young adult novels: Jack of Hearts (and other parts) (American Library Association Rainbow List Top Ten, Guardian’s Best Books of the Year, B&N Favorite Books of the Year) and Camp (Lambda Award finalist, ALA Rainbow List Top Ten, a best book of 2020 from Forbes, Elle, the Today Show, SLJ, Booklist and others), which is being adapted into a film directed by and starring Billy Porter. His books have been translated into many different languages and sold around the world. His next book, Lavender House, an adult historical mystery, will be released fall of 2022.

Lev is originally from lower Manhattan and now lives in even lower Manhattan, right at the edge, with his husband and very small cat. He has an MFA in fiction writing from Sarah Lawrence College and teaches creative writing. You can find him online at LevACRosen.com and @LevACRosen