One Long River of Song: Notes on Wonder 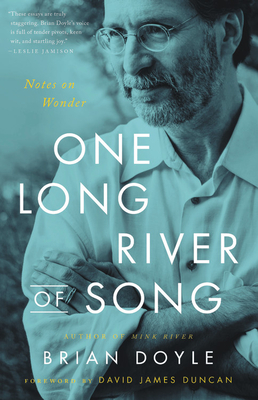 One Long River of Song: Notes on Wonder

By  Brian Doyle , Introduction by  David James Duncan
Hardcover
$ 28.00
Out of Stock In Store

From a "born storyteller" (Seattle Times), this playful and moving bestselling book of essays invites us into the miraculous and transcendent moments of everyday life.

When Brian Doyle passed away at the age of sixty after a bout with brain cancer, he left behind a cult-like following of devoted readers who regard his writing as one of the best-kept secrets of the twenty-first century. Doyle writes with a delightful sense of wonder about the sanctity of everyday things, and about love and connection in all their forms: spiritual love, brotherly love, romantic love, and even the love of a nine-foot sturgeon.

At a moment when the world can sometimes feel darker than ever, Doyle's writing, which constantly evokes the humor and even bliss that life affords, is a balm. His essays manage to find, again and again, exquisite beauty in the quotidian, whether it's the awe of a child the first time she hears a river, or a husband's whiskers that a grieving widow misses seeing in her sink every morning. Through Doyle's eyes, nothing is dull.

David James Duncan sums up Doyle's sensibilities best in his introduction to the collection: "Brian Doyle lived the pleasure of bearing daily witness to quiet glories hidden in people, places and creatures of little or no size, renown, or commercial value, and he brought inimitably playful or soaring or aching or heartfelt language to his tellings." A life's work, One Long River of Song invites readers to experience joy and wonder in ordinary moments that become, under Doyle's rapturous and exuberant gaze, extraordinary.

Brian Doyle (1956-2017) was born in New York and attended the University of Notre Dame. He worked at U.S. Catholic Magazine, Boston College Magazine and, up until his death, was the editor of Portland Magazine. He wrote a number of novels and works of nonfiction, and his essays appeared in the New York Times, Atlantic Monthly, Harper's Orion, American Scholar, America Magazine, and many more. He won the American Academy of Arts and Letters Award in Literature, the 2017 John Burroughs Medal for Distinguished Nature Writing, the Oregon Book Award, three Pushcart Prizes, among others, and had multiple essays included in Best American Essays.