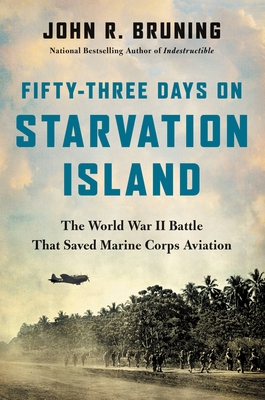 The pivotal true story of the first fifty-three days of the standoff between Imperial Japanese and a handful of Marine aviators defending the Americans dug in at Guadalcanal, from the New York Times bestselling author of Indestructible and Race of Aces.

On August 20, 1942, twelve Marine dive-bombers and nineteen Marine fighters landed at Guadalcanal. Their mission: defeat the Japanese navy and prevent it from sending more men and supplies to "Starvation Island," as Guadalcanal was nicknamed. The Japanese were turning the remote, jungle-covered mountain in the south Solomon Islands into an air base from which they could attack the supply lines between the U.S. and Australia. The night after the Marines landed and captured the partially completed airfield, the Imperial Navy launched a surprise night attack on the Allied fleet offshore, resulting in the worst defeat the U.S. Navy suffered in the 20th century, which prompted the abandonment of the Marines on Guadalcanal.

The Marines dug in, and waited for help, as those thirty-one pilots and twelve gunners flew against the Japanese, shooting down eighty-three planes in less than two months, while the dive bombers, carried out over thirty attacks on the Japanese fleet. Fifty-Three Days on Starvation Island follows Major John L. Smith, a magnetic leader who became America’s top fighter ace for the time; Captain Marian Carl, the Marine Corps’ first ace, and one of the few survivors of his squadron at the Battle of Midway. He would be shot down and forced to make his way back to base through twenty-five miles of Japanese-held jungle. And Major Richard Mangrum, the lawyer-turned-dive-bomber commander whose inexperienced men wrought havoc on the Japanese Navy.

New York Times bestselling author John R. Bruning depicts the desperate effort to stop the Japanese long enough for America to muster reinforcements and turn the tide at Guadalcanal. Not just the story of an incredible stand on a distant jungle island, Fifty-Three Days on Starvation Island also explores the consequences of victory to the men who secured it at a time when America had been at war for less than a year and its public had yet to fully understand what that meant. The home front they returned to after their jungle ordeal was a surreal montage of football games, nightclubs, fine dining with America’s elites, and inside looks at dysfunctional defense industries more interested in fleecing the government than properly equipping the military. Bruning tells the story of how one battle reshaped the Marine Corps and propelled its veterans into the highest positions of power just in time to lead the service into a new war in Southeast Asia.

John R. Bruning is the author or collaborating writer of the national bestseller Indestructible, as well as Outlaw Platoon written with Sean Parnell, Shadow of the Sword with Jeremiah Workman, How to Break a Terrorist with Matthew Alexander, House to House with David Bellavia, The Devil's Sandbox, and Ghost: Confessions of a Counterterrorism Agent with Fred Burton.

Bruning is well traveled as an embedded combat correspondent. For his reporting in Afghanistan, the Department of Defense presented him with the Thomas Jefferson Award in 2010. For his work with the Oregon National Guard, he was inducted into the 162nd Infantry Regiment in September 2011 as an honorary member. John lives in Independence, Oregon, and has two children.