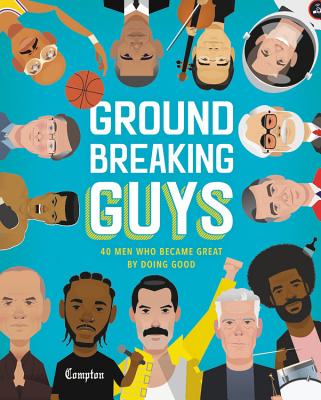 By  Stephanie True Peters , By (artist)  Shamel Washington
$ 16.99
Out of Stock In Store

An illustrated book of biographies highlighting the inspiring and innovative qualities of forty very different men throughout history, for fans of Heroes for My Son and Good Night Stories for Rebel Girls.
Our history books are full of great men, from inventors to explorers to presidents. But these great men were not always good men. It's time for our role models to change. This book pays tribute to Mr. Rogers, Barack Obama, Hayao Miyazaki, and more: men whose masculinity is grounded in compassion and care.
These men have varying worldviews and are accomplished in a range of fields, but they share important commonalities. They served their communities. They treated people with respect. They lifted others up. And they went on to create change, inspire others, and, indeed, do great things--not in spite of their goodness, but because of it.
These men's stories will educate, entertain, and encourage the next generation of writers, activists, entrepreneurs, and other leaders of all genders to do better and be better--to be truly groundbreaking.

Stephanie True Peters has been writing books for young readers for more than twenty-five years, exploring everything from swamp creatures and princesses to sports and superpower dogs. She began her career at Little, Brown in 1989 and worked her way up to editor before striking off on her own after her children, Jackson and Chloe, were born. An avid reader, workout enthusiast, animal lover, and a firm believer that our words and actions matter, Stephanie lives in Mansfield, MA, with her husband Dan, two cats, and two rabbits.

Shamel Washington is an art director, designer, illustrator, and photographer. He lives in New York City.