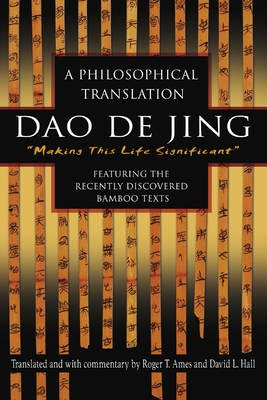 By  Roger Ames , David Hall
Paperback
$ 17.00
Out of Stock In Store (Available to Order)

In 1993, archaeologists unearthed a set of ancient bamboo scrolls that contained the earliest known version of the Dao de jing. Composed more than two thousand years ago, this life-changing document offers a regimen of self-cultivation to attain personal excellence and revitalize moral behavior. Now in this luminous new translation, renowned China scholars Roger T. Ames and David L. Hall bring the timeless wisdom of the Dao de jing into our contemporary world.

In this elegant volume, Ames and Hall feature the original Chinese texts of the Dao de jing and translate them into crisp, chiseled English that reads like poetry. Each of the eighty-one brief chapters is followed by clear, thought-provoking commentary exploring the layers of meaning in the text. This new version of one of the world’s most influential documents will stand as both a compelling introduction to Daoist thought and as the classic modern English translation.

Roger T. Ames is a professor of Chinese philosophy at the University of Hawai’i. He is also editor of the journal Philosophy East & West. He is the author of several interpretive studies of classical Confucianism, including Thinking Through Confucius (with David L. Hall). His translation of Sun-tzu: The Art of Warfare is recognized as a landmark of contemporary Chinese military and philosophical studies and his translation of The Analects of Confucius (with Henry Rosemont, Jr.) has become a popular classroom text.

David L. Hall was a professor of Philosophy at the University of Texas at El Paso. His early research on A. N. Whitehead and American philosophy led him to rethink our understanding of both Daoism and classical Greek philosophy, and resulted in the publication of The Uncertain Phoenix and Eros and Irony. In addition to the interpretive studies of classical Chinese philosophy, he continued to publish in American philosophy with Richard Rorty: Prophet and Poet of the New Pragmatism.