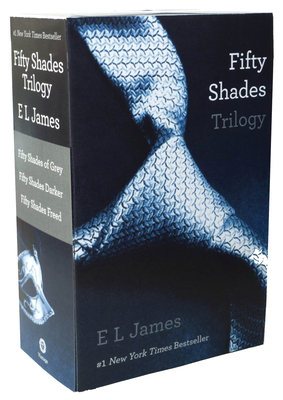 Now available as a three-volume paperback boxed set, E L James’s New York Times #1 bestselling trilogy has been hailed by Entertainment Weekly as being “in a class by itself.” Beginning with the GoodReads Choice Award Romance Finalist Fifty Shades of Grey, the Fifty Shades Trilogy will obsess you, possess you, and stay with you forever.

FIFTY SHADES OF GREY: When college student Anastasia Steele goes to interview young entrepreneur Christian Grey, she encounters a man who is beautiful, brilliant, and intimidating.  The unworldly Ana realizes she wants this man, and Grey admits he wants her, too—but on his own terms. When the couple embarks on a daring, passionately physical affair, Ana discovers Christian’s secrets and explores her own desires.

FIFTY SHADES DARKER: Daunted by Christian’s dark secrets and singular tastes, Ana has broken off their relationship to start a new career. But desire for Christian still dominates her every waking thought. They rekindle their searing sensual affair, and while Christian wrestles with his inner demons, Ana is forced to make the most important decision of her life.

FIFTY SHADES FREED: Now, Ana and Christian have it all—love, passion, intimacy, wealth, and a world of possibilities for their future. But Ana knows that loving her Fifty Shades will not be easy, and that being together will pose challenges that neither of them would anticipate. Just when it seems that their strength together will eclipse any obstacle, misfortune, malice, and fate conspire to turn Ana’s deepest fears into reality.

This book is intended for mature audiences.

E L James is a former TV executive, wife and mother of two based in West London. Since early childhood she dreamed of writing stories that readers would fall in love with, but put those dreams on hold to focus on her family and her career. She finally plucked up the courage to put pen to paper with her first novel, Fifty Shades of Grey.