Saving Capitalism: For the Many, Not the Few 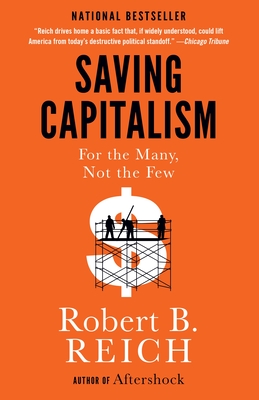 Saving Capitalism: For the Many, Not the Few

America was once celebrated for and defined by its large and prosperous middle class. Now, this middle class is shrinking, a new oligarchy is rising, and the country faces its greatest wealth disparity in eighty years. Why is the economic system that made America strong suddenly failing us, and how can it be fixed?

Leading political economist and bestselling author Robert B. Reich presents a paradigm-shifting, clear-eyed examination of a political and economic status quo that no longer serves the people, exposing one of the most pernicious obstructions to progress today: the enduring myth of the “free market” when, behind the curtain, it is the powerful alliances between Washington and Wall Street that control the invisible hand. Laying to rest the specious dichotomy between a free market and “big government,” Reich shows that the truly critical choice ahead is between a market organized for broad-based prosperity and one designed to deliver ever more gains to the top. Visionary and acute, Saving Capitalism illuminates the path toward restoring America’s fundamental promise of opportunity and advancement.

Robert B. Reich is Chancellor’s Professor of Public Policy at the Richard and Rhoda Goldman School of Public Policy at the University of California, Berkeley, and senior fellow at the Blum Center for Developing Economies. He has served in three national administrations and has written fourteen books, including The Work of Nations, which has been translated into twenty-two languages, and the bestsellers Supercapitalism and Locked in the Cabinet. His articles have appeared in The New Yorker, The Atlantic, The New York Times, The Washington Post, and The Wall Street Journal. He is co-creator of the award-winning 2013 film Inequality for All. He is also chair of the national governing board of Common Cause. He lives in Berkeley.