The Seven Sins Of Memory Updated Edition: How the Mind Forgets and Remembers 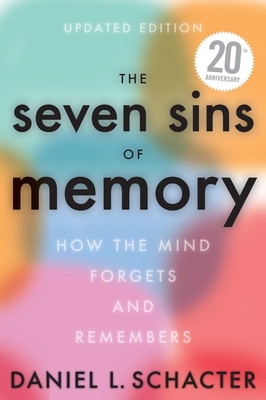 The Seven Sins Of Memory Updated Edition: How the Mind Forgets and Remembers

By one of the world’s foremost psychologists, a groundbreaking and award-winning study updated for the 20th anniversary with new research that delves into the complex behavior of memory


Twenty years ago, The Seven Sins of Memory offered the first framework that explained common memory vices—and their surprising virtues. Now, in this updated edition, Daniel L. Schacter revisits his groundbreaking research with the twenty-first century’s cultural trends and scientific discoveries. How does our ever-increasing reliance on Google, Instagram, and other websites harm our mind’s ability to store and retrieve memories? How has repeated exposure to “fake news” and other false statements increased our bias and made it easier for us to think these statements are true? Exploring the memory miscues that occur in everyday life—absentmindedness, transience, blocking, misattribution, suggestibility, bias, and persistence—Schacter delves into the striking scientific research, giving us a glimpse of the fascinating neurology of memory. Together, the stories and the scientific results provide a new look at our brains and at what we more generally think of as our minds.

DANIEL L. SCHACTER is the William R. Kenan Jr. Professor of Psychology at Harvard University. He has been elected to the National Academy of Sciences and received numerous awards for his research, including the Award for Distinguished Scientific Contributions to Psychology from the American Psychological Association and the Fred Kavli Distinguished Career Contributions Award from the Cognitive Neuroscience Society. He is the author of many books on memory and neuropsychology, including The Seven Sins of Memory and Searching for Memory. Schacter lives in Newton, Massachusetts.  ,