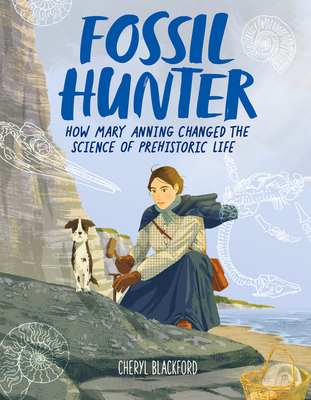 By  Cheryl Blackford
Hardcover
$ 17.99
Pre-Order (Not Yet Published)

“This in-depth, beautifully illustrated biography of Mary Anning sings with the passion and perseverance of the woman herself, who from girlhood on scoured the shifting cliffs of her native Dorset to dig out prehistoric mysteries and make sense of them—altering forever our view of the past.” – Joyce Sidman, Newbery Honor winner and Sibert Medal winner

A fascinating, highly visual biography of Mary Anning, the Victorian fossil hunter who changed scientific thinking about prehistoric life and would become one of the most celebrated paleontologists of all time. Perfect for children learning about woman scientists like Ada Lovelace, Jane Goodall, and Katherine Johnson.

Mary Anning grew up on the south coast of England in a region rich in fossils. As teenagers, she and her brother Joseph discovered England’s first complete ichthyosaur. Poor and uneducated, Anning would become one of the most celebrated paleontologists ever, though in her time she supported herself selling by fossils and received little formal recognition. Her findings helped shape scientific thinking about extinction and prehistoric life long before Darwin published his famous work on evolution.

With engaging text, photographs, and stunning paleoart, Fossil Hunter introduces this self-taught scientist, now recognized as one of the greatest fossilists the world has ever known.

Born in Yorkshire, England, Cheryl Blackford developed a passion for fossils and rocks when she was 13 and would
later graduate with a degree in Geology. She has been fossil hunting in Lyme Regis, studied Anning artifacts and archival
materials in Oxford and Bristol. This is her first biography for children. She now lives in Minnesota.