The Essential Dykes To Watch Out For 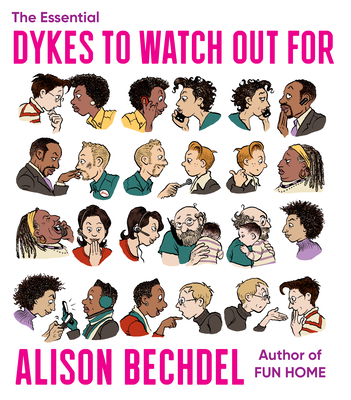 The Essential Dykes To Watch Out For

By  Alison Bechdel
Paperback
$ 18.99
Likely On Our Shelves

Settle in to this wittily illustrated soap opera (Bechdel calls it “half op-ed column and half endless serialized Victorian novel”) of the lives, loves, and politics of Mo, Lois, Sydney, Sparrow, Ginger, Stuart, Clarice, and the rest of the cast of cult-fav characters. Most of them are lesbians, living in a midsize American city that may or may not be Minneapolis. Bechdel’s brilliantly imagined countercultural band of friends—academics, social workers, bookstore clerks—fall in and out of love, negotiate friendships, raise children, switch careers, and cope with aging parents. Bechdel fuses high and low culture—from foreign policy to domestic routine, hot sex to postmodern theory—in a serial graphic narrative “suitable for humanists of all persuasions.”

ALISON BECHDEL’s cult following for her early comic strip Dykes to Watch Out For expanded wildly for her family memoirs, the New York Times bestselling and Time magazine #1 Book of the Year graphic memoir Fun Home, adapted into a Tony Award-winning musical, and Are You My Mother? Bechdel has been named a MacArthur Fellow and Cartoonist Laureate of Vermont, among many other honors. The Secret to Superman Strength is her third graphic memoir.