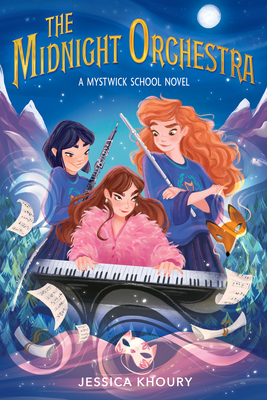 By  Jessica Khoury
Hardcover
$ 16.99
Out of Stock In Store

In this spellbinding and "well-orchestrated"* sequel to The Mystwick School of Musicraft, Amelia must master the magic of Composing to help her school win a magic competition—and save her friends from a mysterious evil. (*Kirkus Reviews)

Things are finally looking up for Amelia Jones: she's officially a Mystwick student, and she even has a teacher to help her learn how to use her rare Composing magic. When Mystwick enters an international magic competition, it’s Amelia's chance to Compose something that will help them win the day.

The only problem is that she still doesn’t understand how her powers work. But then she hears about a super exclusive Midnight Orchestra—half performance, half magical black market—and Amelia is sure that’s where she’ll find the answer to her Composing problem.

But the Midnight Orchestra is far more sinister than it initially appears and if Amelia can’t unlock her Composing powers, not only will Mystwick lose the musicraft competition, she won’t be able to rescue her friends from the danger unleashed in this thrilling adventure.

Jessica Khoury is the author of multiple books for teens and young readers. In addition to writing, she is an artistic mapmaker and spends far too much time scribbling tiny mountains and trees for fictional worlds. Her spare hours are spent video gaming, painting, or cooking badly. She lives in Greenville, South Carolina, with her husband, daughters, and sassy husky Katara.