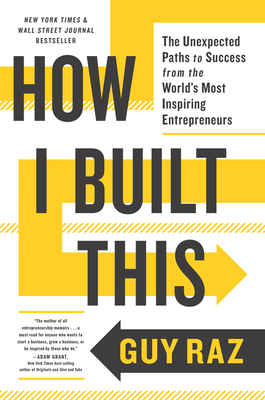 A NEW YORK TIMES BESTSELLER WALL STREET JOURNAL #1 Best-selling Business Book Based on the highly acclaimed NPR podcast, How I Built This with Guy Raz, this book offers priceless insights and inspiration from the world’s top entrepreneurs on how to start, launch, and build a successful venture.

Great ideas often come from a simple spark: A soccer player on the New Zealand national team notices all the unused wool his country produces and figures out a way to turn them into shoes (Allbirds). A former Buddhist monk decides the very best way to spread his mindfulness teachings is by launching an app (Headspace). A sandwich cart vendor finds a way to reuse leftover pita bread and turns it into a multimillion-dollar business (Stacy’s Pita Chips).

Award-winning journalist and NPR host Guy Raz has interviewed more than two-hundred highly successful entrepreneurs to uncover amazing true stories like these. In How I Built This, he shares tips for every entrepreneur’s journey: from the early days of formulating your idea, to raising money and recruiting employees, to fending off competitors, to finally paying yourself a real salary. This is a must-read for anyone who has ever dreamed of starting their own business or wondered how trailblazing entrepreneurs made their own dreams a reality.

GUY RAZ—author of the New York Times bestseller How I Built This and coauthor of the #1 New York Times bestseller The How and Wow of the Human Body and Two Whats?! and a Wow! Think & Tinker Playbook—has been called “one of the most popular podcasters in history” by the New York Times. He is the co-creator and cohost of Wow in the World and Two Whats?! and a Wow! and is the host and creator of NPR’s How I Built This podcast and Wisdom from the Top on Luminary. Previously, Guy cocreated and hosted NPR’s TED Radio Hour and The Rewind on Spotify. He’s been on the radio for more than two decades and has served as a foreign and war correspondent and as a host of All Things Considered. Guy is the father of two boys and lives in the Bay Area where he can often be seen riding his bike in red pants.