Divided Spheres: Geodesics and the Orderly Subdivision of the Sphere 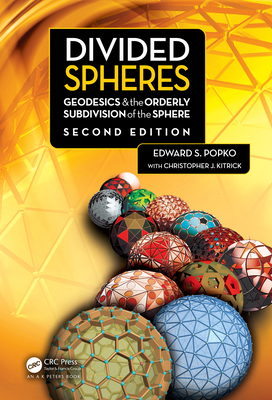 Divided Spheres: Geodesics and the Orderly Subdivision of the Sphere

Praise for the previous edition

. . .] Dr. Popko's elegant new book extends both the science and the art of spherical modeling to include Computer-Aided Design and applications, which I would never have imagined when I started down this fascinating and rewarding path.

His lovely illustrations bring the subject to life for all readers, including those who are not drawn to the mathematics. This book demonstrates the scope, beauty, and utility of an art and science with roots in antiquity. . . .] Anyone with an interest in the geometry of spheres, whether a professional engineer, an architect or product designer, a student, a teacher, or simply someone curious about the spectrum of topics to be found in this book, will find it helpful and rewarding.
- Magnus Wenninger, Benedictine Monk and Polyhedral Modeler

Ed Popko's comprehensive survey of the history, literature, geometric, and mathematical properties of the sphere is the definitive work on the subject. His masterful and thorough investigation of every aspect is covered with sensitivity and intelligence. This book should be in the library of anyone interested in the orderly subdivision of the sphere.
- Shoji Sadao, Architect, Cartographer and lifelong business partner of Buckminster Fuller

Edward Popko's Divided Spheres is a thesaurus must to those whose academic interest in the world of geometry looks to greater coverage of synonyms and antonyms of this beautiful shape we call a sphere. The late Buckminster Fuller might well place this manuscript as an all-reference for illumination to one of nature's most perfect inventions.
- Thomas T. K. Zung, Senior Partner, Buckminster Fuller, Sadao, & Zung Architects.

This first edition of this well-illustrated book presented a thorough introduction to the mathematics of Buckminster Fuller's invention of the geodesic dome, which paved the way for a flood of practical applications as diverse as weather forecasting and fish farms. The author explained the principles of spherical design and the three classic methods of subdivision based on geometric solids (polyhedra).

This thoroughly edited new edition does all that, while also introducing new techniques that extend the class concept by relaxing the triangulation constraint to develop two new forms of optimized hexagonal tessellations. The objective is to generate spherical grids where all edge (or arc) lengths or overlap ratios are equal.

New to the Second Edition

New Foreword by Joseph Clinton, lifelong Buckminster Fuller collaborator A new chapter by Chris Kitrick on the mathematical techniques for developing optimal single-edge hexagonal tessellations, of varying density, with the smallest edge possible for a particular topology, suggesting ways of comparing their levels of optimization An expanded history of the evolution of spherical subdivision New applications of spherical design in science, product design, architecture, and entertainment New geodesic algorithms for grid optimization New full-color spherical illustrations created using DisplaySphere to aid readers in visualizing and comparing the various tessellations presented in the book Updated Bibliography with references to the most recent advancements in spherical subdivision methods

Edward S. Popko is a graduate of the University of Detroit's School of Architecture and has both Masters and PhD degrees from Massachusetts Institute of Technology. He is a registered architect and former Fulbright Scholar. In the 1960s, he was an apprentice in Buckminster Fuller's affiliate office, Geometrics, Inc., in Cambridge, Massachusetts, and later authored Geodesics, a primer on geodesic domes, and Transitions, a documentary of urban settlements in developing countries. For the past 25 years, he has held research, product development, and marketing positions for Computer Aided Design and Geographic Information Systems technology within IBM. He has managed software development teams in computer mapping and CAD solutions for architects, industrial buildings, high‐tech plants, and shipbuilding.He is retired from IBM and lives with his wife, Geraldine, in Woodstock, New York. They have a daughter Ellen and a son Gerald.Christopher J. Kitrick is a graduate of the University of Cincinnati with a bachelor's in Architecture and a masters in Structural Engineering. In the late 1970s he interned for 3 years at Buckminster Fuller's professor emeritus office on the campus of the University of Philadelphia. During that tenure he was involved in Fuller's Synergetics II book, multiple dome developments, tensegrity research, and the first computerized version edition of the Dymaxion Air‐Ocean map.For the past 36 years he has been involved with graphics software and hardware development from mainframe to mobile devices enabling the rapid advancement of visual technology. Independently he has authored and presented numerous technical papers on spherical geometry at international conferences on space structures.He is still working and resides in La Jolla, California, with his wife Tomoko. They have two sons Francis and Ian, and one daughter, Eileen.