The Trouble with Happiness: And Other Stories 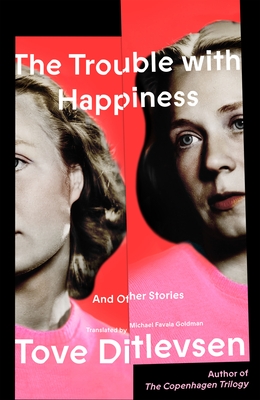 The Trouble with Happiness: And Other Stories

By  Tove Ditlevsen , Translated by  Michael Favala Goldman
Hardcover
$ 26.00
Out of Stock In Store

The Trouble with Happiness is a powerful new collection of short stories by Tove Ditlevsen, "a terrifying talent" (Parul Sehgal, New York Times).

A newly married woman longs, irrationally, for a silk umbrella; a husband chases away his wife’s beloved cat; a betrayed mother impulsively sacks her housekeeper. Underneath the surface of these precisely observed tales of marriage and family life in mid-century Copenhagen pulse currents of desire, violence, and despair, as women and men struggle to escape from the roles assigned to them and dream of becoming free and happy—without ever truly understanding what that might mean.

Tove Ditlevsen is one of Denmark’s most famous and beloved writers, and her autobiographical Copenhagen Trilogy was hailed as a masterpiece on re-publication in English, lauded for its wry humor, limpid prose, and powerful honesty. The poignant and understated stories in The Trouble with Happiness, written in the 1950s and 1960s and never before translated into English, offer readers a new chance to encounter the quietly devastating work of this essential twentieth-century writer.