Roots of Steel: Boom and Bust in an American Mill Town 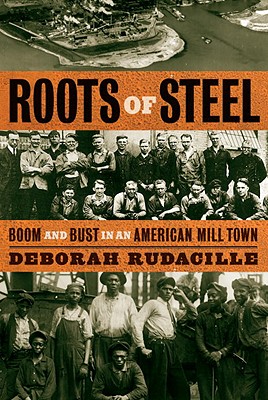 Roots of Steel: Boom and Bust in an American Mill Town

When Deborah Rudacille was a child growing up in the working-class town of Dundalk, Maryland, a worker at the local Sparrows Point steel mill made more than enough to comfortably support a family. But in the decades since, the decline of American manufacturing has put tens of thousands out of work and left the people of Dundalk pondering the broken promise of the American dream.

In Roots of Steel, Rudacille combines personal narrative, interviews with workers, and extensive research to capture the character and history of this once-prosperous community. She takes us from Sparrows Point’s nineteenth-century origins to its height in the twentieth century as one of the largest producers of steel in the world, providing the material that built America’s bridges, skyscrapers, and battleships. Throughout, Rudacille dissects the complicated racial, class, and gender politics that played out in the mill and its neighboring towns, and details both the arduous and dangerous work at the plant and the environmental cost of industrial progress to the air and waterways of the Maryland shore.

Powerful, candid, and eye-opening, Roots of Steel is a timely reminder, as the American economy seeks to restructure itself, of the people who inevitably have been left behind.

Deborah Rudacille is a science writer and the author of "The Riddle of Gender: Science, Activisim, and Transgender Rights" and "The Scalpel and the Butterfly: The War Between Animal Research and Animal Protection." She lives in Baltimore, Maryland.