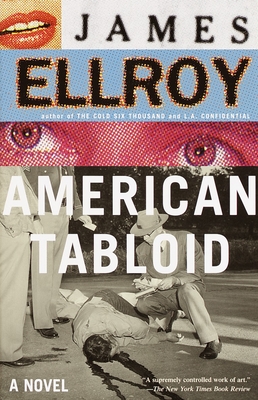 The internationally acclaimed author of the L.A. Quartet and The Underworld USA Trilogy, James Ellroy, presents another literary noir masterpiece of historical paranoia.

We are behind, and below, the scenes of JFK's presidential election, the Bay of Pigs, the assassination--in the underworld that connects Miami, Los Angeles, Chicago, D.C. . . .

Where the CIA, the Mob, J. Edgar Hoover, Howard Hughes, Jimmy Hoffa, Cuban political exiles, and various loose cannons conspire in a covert anarchy . . .
Where the right drugs, the right amount of cash, the right murder, buys a moment of a man's loyalty . . .

James Ellroy's trademark nothing-spared rendering of reality, blistering language, and relentless narrative pace are here in electrifying abundance, put to work in a novel as shocking and daring as anything he's written: a secret history that zeroes in on a time still shrouded in secrets and blows it wide open.

James Ellroy was born in Los Angeles in 1948. He is the author of the L.A. Quartet: The Black Dahlia, The Big Nowhere, L.A. Confidential, and White Jazz, and the Underworld U.S.A. Trilogy: American Tabloid, The Cold Six Thousand, and Blood’s A Rover. These seven novels have won numerous honors and were international best sellers. He is also the author of two collections, Crime Wave and Destination: Morgue! and two memoirs My Dark Places and The Hilliker Curse.  Ellroy currently lives in Denver, Colorado.