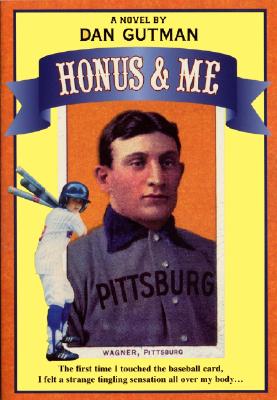 By  Dan Gutman
Paperback
$ 7.99
On Our Shelves Now

With more than 2 million books sold, the Baseball Card Adventures bring the greatest players in history to life!

With historical photos and back matter to separate the facts from the fiction, New York Times bestselling author Dan Gutman takes readers on a page-turning trip through baseball’s past. Perfect for young readers who love time travel stories and dream about meeting history’s greatest baseball players!

Joe Stoshack lives for baseball. He knows everything there is to know about the game—except how to play well. His specialty is striking out.

Stosh feels like a real loser, and when he takes a low-paying job cleaning a bunch of junk out of his neighbor's attic, he feels even worse—until he comes across a little piece of cardboard that takes his breath away. His heart is racing. His brain is racing. He can hardly believe his eyes. Stosh has stumbled upon a T-206 Honus Wagner—the most valuable baseball card in the world!

But he's about to find out that it's worth a lot more than money. Because it turns out Stosh has the incredible ability to travel through time using baseball cards—and now he’s headed back to 1909, when Honus Wagner played for the Pittsburgh Pirates in a World Series for the record books. But will the legendary Honus Wagner be able to teach Joe how to be a better baseball player?