There Are No Children Here: The Story of Two Boys Growing Up in The Other America 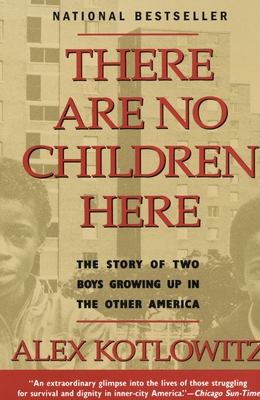 There Are No Children Here: The Story of Two Boys Growing Up in The Other America

By  Alex Kotlowitz
Paperback
$ 18.00
Out of Stock In Store

NATIONAL BESTSELLER • A moving and powerful account by an acclaimed journalist that "informs the heart. [This] meticulous portrait of two boys in a Chicago housing project shows how much heroism is required to survive, let alone escape" (The New York Times).

"Alex Kotlowitz  joins the ranks of the important few writers on the  subiect of urban poverty."—Chicago Tribune

The story of two remarkable boys struggling to survive in Chicago's  Henry Horner Homes, a public housing complex disfigured by crime and neglect.

ALEX KOTLOWITZ is the author of the national bestseller There Are No Children Here, which the New York Public Library selected as one of the 150 most important books of the twentieth century. His second book, The Other Side of the River, was awarded the Heartland Prize for Non-Fiction. For his documentary film, The Interrupters, he received an Emmy and a Film Independent Spirit Award for Best Documentary. Kotlowitz’s work, which has appeared in The New York Times Magazine, The New Yorker, and on public radio’s This American Life, has been honored with two Peabody awards, two duPont-Columbia University awards, and a George Polk Award. He is a writer in residence at Northwestern University. Kotlowitz lives with his wife, Maria Woltjen, and their two children, Mattie and Lucas, just outside of Chicago.