A Stake in the Outcome: Building a Culture of Ownership for the Long-Term Success of Your Business 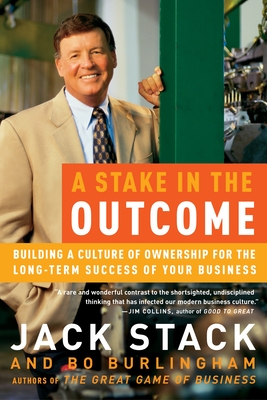 A Stake in the Outcome: Building a Culture of Ownership for the Long-Term Success of Your Business

The First Management Classic of the New Millennium!
A bold experiment is taking place these days, as leading-edge companies turn upside down the management paradigm that has dominated corporate thinking for more than one hundred years. Southwest Airlines is perhaps the most visible practitioner, soaring through economic downturns while its competitors slash their budgets and order massive layoffs, but you can find other pioneers of the new approach in almost every industry and market niche. Their secret: a culture of ownership that allows them to tap into the most underutilized resource in business today–namely, the enthusiasm, intelligence, and creativity of working people everywhere.

No one knows more about building a culture of ownership than CEO Jack Stack, who’s been working on one for the past twenty years with his colleagues at SRC Holdings Corporation (formerly Springfield ReManufacturing Corporation). Along the way, they’ve turned their company into what Business Week has called a “management Mecca,” attracting thousands of people representing hundreds of businesses to SRC’s home in Springfield, Missouri. There the visitors learn how to incorporate the ideals and values of SRC’s remarkable corporate culture into their own organizations–and then they go back and do it.

Now, in A Stake in the Outcome, Stack offers a master class on creating a culture of ownership, presenting the hard-won lessons of his own twenty-year journey and explaining what it really takes to build for long-term success. The pioneer of “open-book management” (described in the best-selling classic The Great Game of Business), Stack and twelve other managers began their journey in 1982, when they purchased their factory from its struggling parent company. SRC grew 15 percent a year, while adding almost a thousand new jobs, and the company’s stock price rocketed from 10 cents to $81.60 per share. In the process, Stack discovered that long-term success required constant innovation–and that building a culture of ownership involved much more than paying bonuses, handing out stock options, or setting up an employee stock ownership plan. In a successful ownership culture, every employee had to take the fate of the company as personally as an individual owner would. Achieving that level of commitment was extraordinarily difficult, but Stack realized that the payoff would be enormous: a company that was consistently able to outperform the market.

A Stake in the Outcome isn’t about theory–it’s about practice. Stack draws from his own successes and failures at SRC to show how any company can teach its employees to think and act like owners, including how to implement an effective equity-sharing program, how to promote continuous learning at every level of the organization, how to fire up employees’ competitive juices, how to broaden the concept of leadership and delegate responsibility for the business, and how to build a workforce that is fast on its feet and ready to take advantage of every opportunity. You’ll also learn about other companies that have succeeded in building cultures of ownership–and the lessons they can teach the rest of us.

Written in Jack Stack’s straightforward, witty, no-beating-around-the-bush style, A Stake in the Outcome is like having a one-on-one session with a master entrepreneur and business innovator. It shows managers and executives of companies both large and small how to build a ferociously motivated workforce that is energized and committed to meeting and overcoming the most daunting challenges a company can face.

JACK STACK is President and CEO of SRC Holding Corporation, an employee-owned company that supplies remanufactured engines to the transportation industries. He lives in Springfield, Missouri. BO BURLINGHAM is an editor-at-large of Inc. magazine and lives in Cambridge, Massachusetts. They are the authors of the bestseller The Great Game of Business.