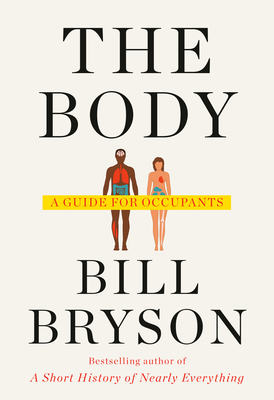 AN INSTANT NEW YORK TIMES BESTSELLER • A BEST BOOK OF THE YEAR BY THE WASHINGTON POST • LONGLISTED FOR THE PEN E.O. WILSON LITERARY SCIENCE WRITING AWARD

"Glorious. . .You will marvel at the brilliance and vast weirdness of your design." —The Washington Post

Bill Bryson, bestselling author of A Short History of Nearly Everything, takes us on a head-to-toe tour of the marvel that is the human body. As addictive as it is comprehensive, this is Bryson at his very best, a must-read owner's manual for everybody.

Bill Bryson once again proves himself to be an incomparable companion as he guides us through the human body--how it functions, its remarkable ability to heal itself, and (unfortunately) the ways it can fail. Full of extraordinary facts (your body made a million red blood cells since you started reading this) and irresistible Bryson-esque anecdotes, The Body will lead you to a deeper understanding of the miracle that is life in general and you in particular. As Bill Bryson writes, "We pass our existence within this wobble of flesh and yet take it almost entirely for granted." The Body will cure that indifference with generous doses of wondrous, compulsively readable facts and information.

BILL BRYSON's bestselling books include A Walk in the Woods, The Life and Times of the Thunderbolt Kid, and A Short History of Nearly Everything (which won the Aventis Prize in Britain and the Descartes Prize, the European Union's highest literary award). He was chancellor of Durham University, England's third oldest university, from 2005 to 2011, and is an honorary fellow of Britain's Royal Society.