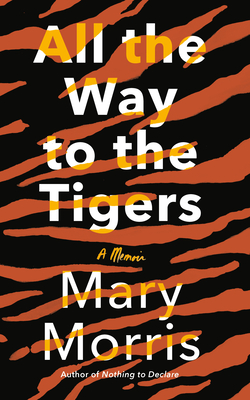 From the author of Nothing to Declare, a new travel narrative examining healing, redemption, and what it means to be a solo woman on the road.

In February 2008, a casual afternoon of iceskating derailed the trip of a lifetime. Mary Morris was on the verge of a well-earned sabbatical, but instead she endured three months in a wheelchair, two surgeries, and extensive rehabilitation. One morning, when she was supposed to be in Morocco, Morris was lying on the sofa reading Death in Venice, casting her eyes over these words again and again: "He would go on a journey. Not far. Not all the way to the tigers." Disaster shifted to possibility and Morris made a decision. When she was well enough to walk again (and her doctor wasn't sure she ever would), she would go "all the way to the tigers."

So begins a three-year odyssey that takes Morris to India on a tiger safari in search of the world's most elusive apex predator. Her first lesson: don't look for a tiger because you won't find it--look for signs of a tiger. And all unseen tigers, hiding in the bush, are referred to as "she." Morris connects deeply with these magnificent and highly endangered animals, and at the same time more deeply with herself.

Written in over a hundred short chapters accompanied by the author's photographs, this travel memoir offers an elegiac, wry, and wise look at a woman on the road and the glorious, elusive creature she seeks. Mary Morris turns a personal catastrophe into a rich, multilayered memoir full of growth, family history, and thrilling adventure.

Mary Morris is the author of numerous works of fiction, including the novels Gateway to the Moon, The Jazz Palace, A Mother's Love, and House Arrest, and of nonfiction, including the travel classic Nothing to Declare: Memoirs of a Woman Traveling Alone. Morris is a recipient of the Rome Prize in literature and the 2016 Anisfield-Wolf Book Award for Fiction. She lives in Brooklyn, New York.